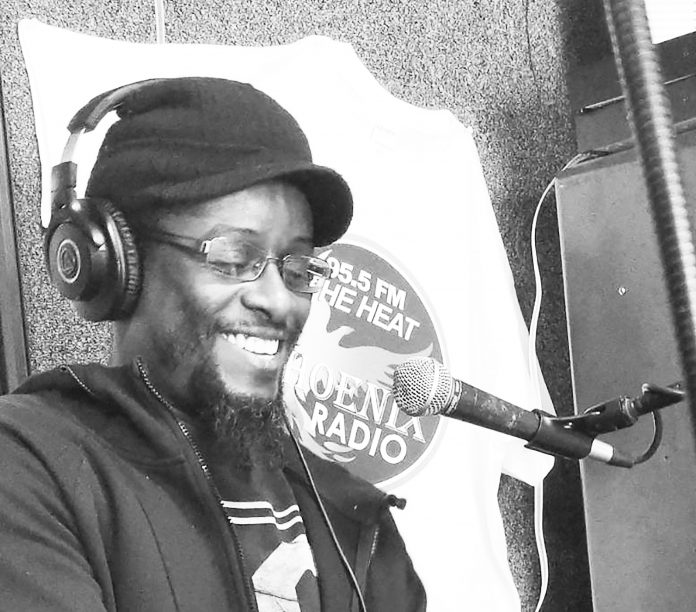 His education in music began during childhood, in a house filled with music.

“I listened to whatever my Mom brought in the house,” he said. “She was a big Prince fan. She also loved the Jackson 5 and Michael Jackson, and was into club music. She had one of the records of ‘Rapper’s Delight.” Anita Baker and Whitney Houston were other early influences.

Originally from Brooklyn, Kain also listened to the radio extensively during the 1980’s in New York. In 1991, Kain moved to Utica, bringing his background in the music of the city with him.

While Kain’s interests center around the arts and news, he did not always want to be a DJ.

“When I was around fourteen, I started writing songs,” he said. “At fifteen or sixteen, I bought my first four track recording equipment from Big Apple Music in Utica. I started recording music at sixteen.” Music production and design are more of Kain’s areas of expertise.

“I mainly do illustration,” he said. “That’s incorporated into graphic design. I have an Associate’s Degree from MVCC in Graphic Design, called Advertising Design then.”

Kain’s direct path to his current career as a DJ began in his twenties when he was living with a couple of DJs.

“I lived with Dr. Duss and Jazzy G.,” he explained. “They were from the same projects as the pioneers of Hip Hop. In my time living with them, I learned a lot. I was recording music, and they showed me a lot about music and how it works. In about four years, I began to DJ myself.”

Kain described early on the job DJ training helping out the DJs he lived with. “I used to have to ride with them to gigs in a U-Haul truck. You would be in the dark for five hours because back then you had to travel with crates of records. I rode in the back of the truck with three to five other guys, crates of records, and no light.”

Learning at the side of his roommates would soon lead to his first professional job in 2002.

“I started working as a DJ at the local strip clubs, Fantasies and Teasers,” he said. “I needed the money.”

DJing at strip clubs may not have been Kain’s ideal job, but he did it well, and eventually became the head DJ at Fantasies.

“You get to see who steps out at night when you’re working at a place like Fantasies,” he said. “The creative challenge was, ‘How do you make the music just as entertaining as the girls?’ But I did it.”

By 2005, Kain had started DJing around the neighborhood. He spent around two or two and a half years taking gigs for little to no pay, but once he began DJing at after parties for a club called “Oscars,” and working at a club named Bogie in 2007-2008, word of his talent spread.

By the 2010s, Kain had become involved with the Utica Battle League on YouTube, forging connections with the owner of The Upper Level, located on Genesee Street,  the biggest club in Utica at the time.

“I was dominating around here,” Kain said. “I worked with Bryson, a.k.a. “DJ Big B of Phoenix Radio. Every day of the weekend, I was booked. I worked every Thursday through Sunday.”

Kain continued to dominate until the scene faded away due to people moving away and moving on to different projects, but the connections he had formed with other DJs would eventually lead him to Phoenix Radio in 2018.

Kain is particularly proud of 95.5 The Heat, Phoenix Radio, because he sees it as a station that presses the reset button on radio, and brings listeners back to the way radio was meant to be enjoyed.

“Phoenix Radio is a throw back to original radio,” he explained. “Everything you hear from us is real. Other stations, twice a month they get sent the Billboard Top 200 list. They have to choose from that, and there are about five or six songs they’re required to play twice an hour. Here, I can open up with Muddy Waters in the morning.”

Over the coming weeks, Kain will begin the process of taking on the additional duties of a News Anchor.

Kain further explained that this made him the person in charge of writing stories from the field reporters’ notes, and calling coaches to get the details of games in order to write them into copy for the editor.

As with music, Kain credits his family for launching his love of news and research.

“My mother did influence my interest in news. She would write articles for the newspaper in Brooklyn College when she was a student there. She had typewriters, word processors, and a huge expensive collection of Encyclopedia Britannicas,” Kain said. “Whenever I would ask her a question she would almost always refer me to those encyclopaedias to find the answer and then report it back to her. My grandmother would always take over the only TV that we can watch in the house at 5 o’clock to watch her news until about 6:30 at which time she would watch Family Feud so now I love the news culture and I kill at Family Feud.”

Kain looks forward to bringing this skill to Phoenix Radio.

“At Phoenix Radio, I will get to watch national news coverage, then boil it down to a conversation for the morning show.”

DJing and news may seem a mismatch to some, but Kain is more than qualified to tackle both jobs. In addition to having an extensive background in both areas, Kain brings a focus on melding the classic with the current that makes him ideal for both music and news.

“I enjoy playing new music,” he says. “My favorite thing to do is break records. That’s what you call it when you play a record for the first time.”

Anyone who would like to follow in Kain’s footsteps is encouraged to put in their time watching and listening those who are experts in their fields.

“Come on in and shut your mouth,” he said. “Watch what I’m doing and take it all in. Apprenticeship is the best way to learn.”

Kain noted that anyone who can afford the equipment can give themselves the title of “DJ,” but added that this often results in low quality music. “It’s like buying a bunch of tools and working on a few cars and calling yourself a mechanic,” he said. “You might learn to do the work eventually, after overcharging people for poor work, but you won’t be a real expert. The same holds true for being a DJ.”

You can enjoy the talent and skill of DJ and News Anchor Chemical Kain every Monday through Friday from 6 a.m. until 10 a.m on The Morning Show on Phoenix Radio, 95.5 The Heat and the Friday Afternoon Shakedown from noon to three every Friday.