The Haudenosaunee Ceremony of Midwinter 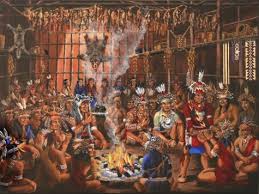 One of the most important gatherings among the People of the Longhouse is the annual ritual of thanksgiving, renewal, and repentance called Midwinter.
Among the People of the Flint (the Mohawks), this gathering of the people in the longhouse is the most elaborate ceremonial activity of the year. It is a time of celebration marked by feasting, singing, and dancing as the people give thanks to Creation for the many blessings of life.

The traditional, or longhouse, people of the Mohawk Nation have three large families of clans: Bear, Wolf, and Turtle. Each clan has a specific place inside the longhouse with the duty of ensuring the ceremonies are conducted in the proper fashion by selecting from among its members those individuals who will carry out the rituals of Midwinter.

These persons may be male or female but anyone who is chosen serves the people for life or until they asked to be relieved of their responsibilities. They are called “faith-keepers” and must watch the various signs of nature to determine when a community ceremony is to be held, one for each phase of the moon throughout the year.

The Midwinter Ceremony takes place five days after the first new moon following the winter solstice and when the star cluster called the Pleiades are at a certain point above the horizon. The Haudenosaunee believe the original human life form called the Skywoman came from the Pleiades and it is where we return to when our time on this earth is completed.

Once the faithkeepers have decided when the celebrations being a society known as the Big Heads will travel from home to home to inform the people and remind them of their duties during Midwinter.
Depending on the specific Haudenosaunee nation, the actual observance of Midwinter may last from 7 days to three weeks. At the Akwesasne longhouse Midwinter takes at least a week to complete.

Each day begins early in the morning with the lighting of the longhouse fires.  During the first day, the people enter the longhouse in the normal way: women come in from the west and sit according to their clan while the men enter from the east and also find their place according to clan.

A faith-keeper or traditional rotiiane (chief) will hold a string of wampum and recite the Thanksgiving Prayer then explain to the people what will take place during the coming days. The rituals prohibit the participation or attendance of non-Natives because the Haudenosaunee have experienced considerable trouble with those who either did not understand what was happening or used the things they learned in an offensive way.

The Midwinter is also an opportunity for the Haudenosaunee and their Native guests to gather in friendship and trust without having to feel they are under observation by people they may not know.
Each day of the Midwinter is marked by the singing of a sacred song to which the people dance. Food is provided for the people as is the special strawberry juice, said to sustain the spirit as well as the body.
The people are given an opportunity to renew their medicines and to take hold of the wampum to repent of any errors they have made in the past year. On the second day, the longhouse will divide into two sections: Bear clan on the south side of the building while Turtles and Wolves sit to the north. This will remain so for the duration of Midwinter.

There is a day for the singing of personal thanksgiving chants, another is set aside for an event called the “Stirring of the Ashes” while a third will be to greet newborns, give them clan names and also welcome adults back to their original ways.

There are events to mark the power of the sun and beauty of the moon with another to send the people’s message to the Creator. All those who attend Midwinter are expected to mark the event by wearing traditional style clothing as this makes them distinct from the other peoples of the world. Modern dress styles are discouraged. Parents are also asked to ensure their children are on their best behavior as it is important for the words of the speakers to be heard clearly.

Near the end of Midwinter, a special activity called the Peach Stone Game is held by the Bear Clan versus the Turtles and Wolves. This contest repeats an event which was held at the beginning of the world when the good Creator invented the game to decide who would oversee the earth. Opposing him was his brother Flint, his twin with the scale like skin and blackness of heart.

Fortunately, Okwirase (the good twin) won at Ù Peach Stone and compelled his brother, Tawiskeron, to dwell in caves far beneath the earth. To commemorate that great event the Haudenosaunee hold the sacred game which is believed to amuse the spiritual beings as well.
At times during the evening of Midwinter, there will be a social dance for the people to relax while giving the younger people an opportunity to meet each one another.

It is truly amazing that such events as Midwinter have survived after decades when such events were forcibly suppressed by the external authorities. Communities such as Akwesasne may well take comfort in knowing a new generation has committed itself to carrying on rituals which are hundreds, if not thousands, of years old.