Steep cost to pray in peace: For many Jewish Americans, 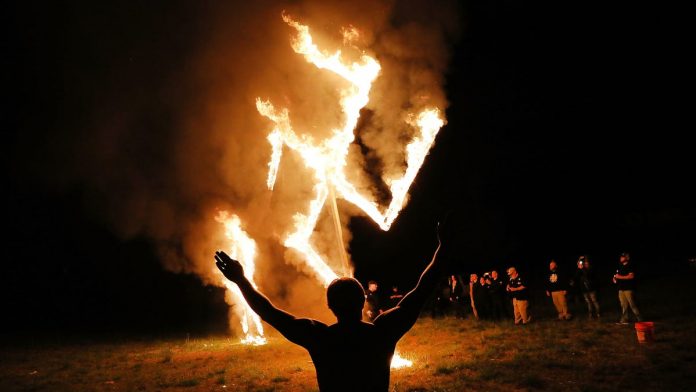 Gunman who took four people hostage at a Texas synagogue in a 10-hour standoff that ended in his death spent time in Dallas area homeless shelters. (Jan. 18)

For many American Jews, the sight of a police cruiser parked outside of a synagogue has been a staple of Sabbath services for two decades.

Now, leaders say the federal government should be doing more to help protect them as they worship. Citing a significant nationwide anti-semitism crisis, including last week’s 11-hour standoff with a gunman at a Texas synagogue, Jewish leaders are pushing Congress to dramatically expand a federal program that has provided nearly half a billion dollars over the last six years in security funding for churches, synagogues and other faith-based institutions. The money allows them to pay for police officers, technology and survival training.

Eric Fingerhut, president of the Jewish Federation of North America, which represents 300 independent Jewish communities and is headquartered in New York, said the funding has been quintessential in protecting thousands of worshippers that would have otherwise left them to face up to violent threats alone.

“The safety and security of the public is first and foremost the responsibility of the government,” said Fingerhut. “We don’t want faith-based institutions to have to divert all the resources that they devote to charity and to caring for each other to security.”

The Jewish Federations of North America first proposed Congress support the security needs of the synagogues and churches after the Sept. 11 attacks. According to the U.S. Department of Homeland Security, which manages the Nonprofit Security Grant Program launched in 2004, funding has climbed from $20 million in 2016 to $180 million last year.

But Jewish leaders said more is needed, with some even calling for doubling funding to $360 million. Earlier this week, 1,500 Jewish leaders met with Attorney General Merrick Garland and Homeland Security Secretary Alejandro Mayorkas via Zoom to enlist support for more security funding.

While the grants program is available to any group facing the highest risk of terrorism-related activity regardless of religious affiliation, historically upward of 80% of the funding has been allocated to Jewish groups. Liza Acevedo, a spokesperson at the Department of Homeland Security, said the Texas synagogue attacked over the weekend had previously received funding from the program.

Mayorkas told USA TODAY in a statement this week he will push Congress to deliver even more dollars to protect people against terrorism and hate crimes in their places of worship.

“We must dedicate more funding to this vital effort,” said Mayorkas. “Increasing this funding is a foundational step to reinforcing and fortifying pillars of our community, places that should always remain houses of worship, prayer, gathering and peace.”

Ongoing security threats have led to  synagogues locking their doors

The Federal Bureau of Investigation reported that 54.9% of religious biased crimes targeted Jews. In 2020 – the most recent data year available – a majority of reported incidents involved the destruction or vandalism of property followed by intimidation and assaults.

The call for more security began in the wake of 9/11 as conspiracy theories swirled that Jews were responsible for bringing down the twin towers of the World Trade Center and coincided with a wave of terrorist attacks in Israel.

“Our own institutions are particularly vulnerable to future terrorist threats in this country by virtue of our Jewish affiliation. Both the rhetoric of those responsible for September’s attacks and past experience support this view,” read a November 2001 letter submitted by leaders of the Jewish community to the then-Senate Governmental Affairs Committee on the first congressional hearing on the security needs of states and localities.

Then came the Tree of Life Congregation shooting in 2018 — the deadliest antisemitic attack on U.S. soil — where a gunman opened fire with an AR-15-style rifle inside of a Pittsburgh synagogue and killed 11 people.

Frank Figliuzzi, the former assistant director of the FBI for counterintelligence and author of “The FBI Way,” said heightened security measures and trainings have extended beyond synagogues to Hebrew schools, assisted-living facilities, retirement communities and nursing homes that predominantly serve Jewish communities because of the increased threat level.

This training, “is survival training, it’s de-escalation, it’s how to escape. This training you won’t find in other faiths. Why? Because historically, of course, they are a target,” said Figliuzzi, who ran counterterrorism programs including overseeing the response to threats in Jewish communities across the country.

He added: “I can assure you every FBI field office…has on their speed dial the leaders of the Jewish community.”

Rabbi Charlie Cytron-Walker, one of the hostages held at the Congregation Beth Israel in Colleyville, Texas, last week, credited FBI and other training for saving his life. During the standoff, Cytron-Walker flung a chair at the armed kidnapper, which allowed him and two others to escape.

The gunman, Malik Faisal Akram, a 44-year-old British citizen, took four people hostage during Saturday services. The standoff ended in Faisal Akram’s death after being was shot by the FBI.

Before 2001, synagogues in the United States had remained open and allowed for non-Jews to join in services as far back as the 1700s.

Historians say this continued even in the face of lynchings, firebombings, educational quotas at universities and being banned from country clubs and gated communities throughout the 20th century.

“Not even when synagogues were being firebombed during the civil rights era in the 1960s did they close their doors,” said Gary Zola, a historian and executive director at the American Jewish Archives in Cincinnati. “The fact that the bedrock the nation has stood on is eroding is causing a crisis of confidence. It’s very hard for Jews to face what is happening.”

Experts said the upsurge in violence directed at Jewish Americans is being fueled by three different sources at the same time: global Islamic terrorism, anti-Zionism and the resurgence of white nationalism in the United States.

According to the organization’s annual audit of anti-semitic incidents, the last three years were among the highest on record since they began tracking attacks in 1979.

Some of the incidents in recent years include deadly attacks by gunmen at an orthodox synagogue north of San Diego and a kosher grocery store in New Jersey, and the stabbing at a rabbi’s home in New York. Many of the rioters that participated in storming the U.S. Capitol on Jan. 6 wore white nationalism symbols and swastikas. One man wore a “Camp Auschwitz” T-shirt glorifying theNaziconcentration camp.

And in a two-week period in May during an outbreak of violence between Israel and Hamas, there were a record 193 anti-Jewish attacks, including two men being assaulted at a Jewish diner in Los Angeles by men from a pro-Palestinian caravan.

Nearly 1 in 4 American Jews has been the subject of anti-semitism over the past year, according to a report by the American Jewish Committee, an advocacy group. The same report also revealed four 4 of every 10 American Jews have refrained from wearing clothing or modified their behavior for fear that “it might reveal their Jewishness.”

For Ehrie at the Anti-Defamation League and Figliuzzi, who both retired from the FBI, the biggest challenge is that the internet and social media have magnified anti-semitic violence because like-minded individuals are more easily able to meet online, plan and execute attacks.

And while there aren’t any signs of this anti-semitism epidemic slowing down, faith-based leaders and government officials have been unequivocal: this must end and Jews need to feel safe.

“Before this weekend, anti-semitism was not a top story. And why not? This is just the most recent example. It shouldn’t take a hostage-taking for Jewish people to feel safe in this country,” Ehrie said.