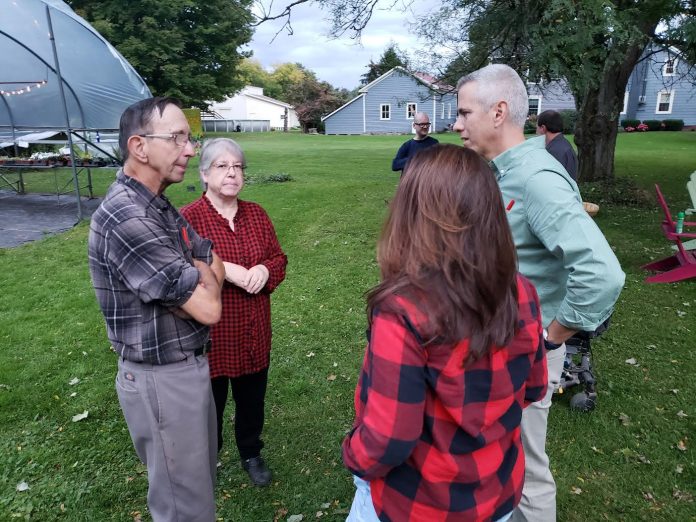 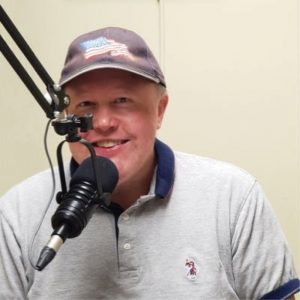 On a warm fall evening in Westmoreland, the rural town’s Democratic Party, and perhaps democracy itself, jolted back to life on Bernie and Denise Szarek’s picturesque farm on South Street.

“The Meet the Candidates event at our farm brought together local, county, and regional candidates with Westmoreland voters,” Denise Szarek said. “We were very pleased with the turnout and that everyone got the chance to talk with the candidates in a relaxed setting around the campfire.”

This relaxed setting, where town residents drank cider and ate donuts beneath trees filled with red and golden autumn leaves, encircled by plump orange pumpkins, and purple and yellow mums was a stark contrast to the threatening message put forth by their counterparts in the town’s Republican party. On that group’s Facebook page, they describe themselves as an organization whose “mission is to town of Westmoreland residents awareness to any issue which challenges to sovereignty, town security, or domestic tranquility. [sic]”

Westmoreland is usually a quiet town where people thankfully haven’t taken up arms against imagined threats to “sovereignty.” It has also been a town of increasing population. This hostile message has a sinister quality that makes it all the more important to many people I spoke to that the all-Republican town government begin to have some balanced representation from Democrats.

“We need positive, creative, active community members on our Town Council,” Denise Szarek said. “We need council members to address the needs of the community, bring new business, housing opportunities, and listen to the community.”

Denise Szarek has a keen understanding of what attracts people to move into a community and what truly keeps families safe. She is a school shooting survivor and has brought that unique perspective to her service on the Westmoreland School Board, where she focuses some of her efforts on safety, as well as finances. She’s been a Real Estate Title Officer for over thirty-seven years and, for the last ten she has been branch manager of the Syracuse office for Frontier Abstract. She has also served on the Westmoreland School Board since 2018.

“Going forward in the aftermath of COVID-19,” Szarek says, “ the Town Board will need creative leaders, up to meeting the challenges of running a municipality in the wake of the pandemic and dwindling state and federal tax revenue. I have already faced some of those challenges as a school board member.”

In addition to these unique qualifications, she also works with her husband, Bernie, on their farm and greenhouse. He is also running for a seat on the Town Council.

“I’ve served the Town of Westmoreland as Assessor for the past thirty-eight years, as a member of the Westmoreland Volunteer Fire Department for fifty-two years, and as a Fire Commissioner for the past nineteen years,” Bernie Szarek says.

His life’s work as a Westmoreland farmer and greenhouse owner has given him the business experience needed in town government.

“I would like to see us apply for available state and federal grants to address the needs of this community,” he said. “We also need to grow small businesses. As Assessor I know how beneficial that would be to the assessment rolls. With a bigger tax base, we could drop the tax rate for homeowners and address our infrastructure issues.”

Bernie Szarek’s role as a Westmoreland Fire Commissioner requires him to find the funding necessary to balance the budget while providing the firefighters with state-of-the-art safety equipment.

The event attracted some of the biggest names in local politics including former Congressman Anthony Brindisi who is running for the New York State Supreme Court. His time in the United States House of Representatives ended this year when Judge Scott DelConte re-appointed Claudia Tenney after a deeply flawed election marred by scandals at the Oneida County Board of Elections. Many people were hoping that Brindisi would run for re-election in 2022. For the former Congressman, however, his role as a dad comes first.

“I have children,” he said. “It’s difficult running back and forth to Washington. This position will allow me to continue serving the community which is something I love very much while being closer to home.”

In June of this year, New York State lawmakers passed legislation expanding the state’s Supreme Court in eleven of the thirteen judicial districts. This will result in the addition of fourteen new justices. Anthony Brindisi is running to fill one of those positions.

Prior to being in Congress, he practiced civil litigation for two decades in the very court in which he hopes to preside. His campaign is predicated on the fact that those years as a lawyer, plus his impeccable record as a public servant was the best training a person could have for the position as State Supreme Court Judge.

“I know how to be fair and impartial, and independent,” he explained to those gathered. “Those are all the traits you want to have in a good judge. I have the right mix of experience.”

For Brindisi, serving as judge will allow him to continue his public service close to the home.

“I love my family, as well as serving the community, and the law,” he summed it up. “This would allow me to combine all of that into one rewarding job.”

For Karen Stanislaus, who is also running for a judgeship, Oneida County Family Court Judge, it’s also all about family.

“You have people come to court who are reaching out,” she observed. “It can be heart-wrenching at times. But, it’s also the kind of place where you see the humanity of people in general.”

Stanislaus has a staggering twenty-one years of experience in family court. She is an attorney and since 2018 has served as a Family Court Referee, which means that, unlike her opponent, she has practical and applicable experience hearing, deciding, and issuing orders in the sorts of domestic violence, child custody, and parenting cases that come to family court.

“I’m running based on my experience,” she said. “I’m the only candidate who has heard thousands of family court cases. I know that decisions have to be made in the best interest of the children.”

She paused for a moment, took a deep breath, and summed it up.

“Your family,” she said, “that’s your lifeline.”

Martin Shedd a new resident of Westmoreland attended the event. He had questions for the candidates, particularly Brindisi.

“What changes do you expect to see on the state Supreme Court with the addition of fourteen new judges.

“There are a lot of the cases that are in the court system now that need to be decided,

Brindisi told him. “The pandemic has really shut down the process. But, I’m ready to hit the ground running once the election is over.”

As night began to fall, the air turned crisp and the Westmoreland residents in attendance finished their cider and put the last log on the campfire. Candidates handed out their campaign materials and Denise Szarek joked about the unusual circumstances of running for Westmoreland Town Council with her husband.

“We’ve survived putting up our campaign signs without killing each other,” she laughed, then stopped and looked at the people who were gathering up their things and getting ready to head home.

“Service to the community, creativity, and a positive attitude knows no bounds,” she told them. “ I would appreciate your consideration for Town Council on November 2nd.”