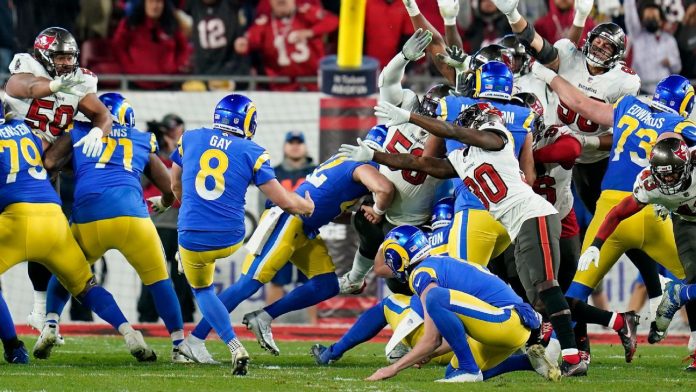 TAMPA, Fla. — When the Los Angeles Rams acquired Matthew Stafford in a blockbuster trade last winter, the veteran quarterback said he wanted to play in big games, an opportunity he seldom got during 12 seasons with the Detroit Lions.

Stafford and the Rams — fresh off a dramatic 30-27 win here — are now one victory away from the biggest game of all.

And they nearly blew their chance to get to the NFC Championship Game, losing four fumbles and a 27-3 third-quarter lead to Tom Brady and the defending champion Tampa Bay Buccaneers before Stafford led a drive in the closing seconds to set up the winning field goal.

Stafford hit All-Pro receiver Cooper Kupp for gains of 20 and 44 yards to set up Matt Gay‘s 30-yard game winner. What was nearly an epic collapse became an emotional victory and a date with the San Francisco 49ers next week at SoFi Stadium. Los Angeles will have the chance to do what Tampa Bay did last season and play in the Super Bowl on its home field.

Stafford turned in another clean performance, tossing two touchdown passes and rushing for another. He again got help from his loaded cast of offensive players as well as the Rams’ star-studded defense, which sacked Brady three times and picked him off once, only to allow three touchdowns over the final 16 minutes.

So much for Stafford not being able to win in the playoffs.

He entered last week’s wild-card game with the most regular-season touchdown passes (323) among quarterbacks without a playoff victory. Now, he’s got two of them — including one over the greatest quarterback of all time and the reigning champions in their building, where the Bucs had lost only once this season.

Stafford completed 28 of 38 attempts for 366 yards. He tossed touchdown passes to backup tight end Kendall Blanton and Kupp. His 70-yarder to Kupp put the Rams up 17-3 early in the second quarter. Stafford’s 1-yard rushing score — his second score on a goal-line sneak in as many weeks — made it 27-3.

It was shaping up to be another stress-free win until a string of fumbles opened the door for Brady and his veteran club.

The 49ers defeated the No. 4-seeded Rams twice in the regular season, including a 27-24 overtime victory in Week 18 in which they rallied back from a 17-0 deficit.

According to ESPN Stats & Information research, the only other team seeded fourth or lower to host a conference championship game since 1990 was the 2008 Arizona Cardinals, who were also a No. 4 seed.

Facebook
Twitter
Previous articlePlaid, the service used by Venmo, Acorns, Robinhood, and more, may owe you some money
Next articleBills vs. Chiefs – Game Summary – January 23, 2022 – ESPN