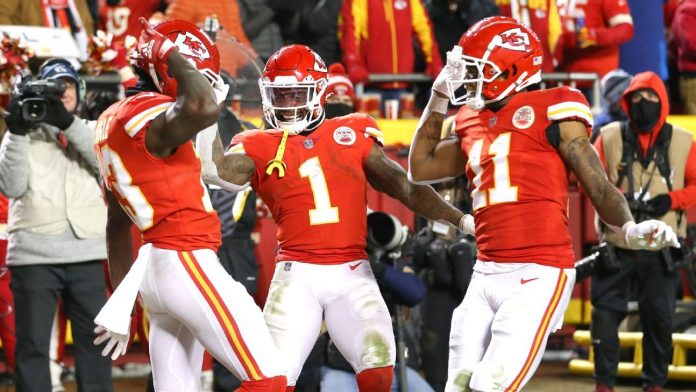 KANSAS CITY, Mo. — Patrick Mahomes made one of his off-schedule plays to give the Kansas City Chiefs a brief lead against the Buffalo Bills late in the first half of their divisional-round playoff game at Arrowhead Stadium. But quarterback Josh Allen and the Bills responded with a 75-yard touchdown drive to tie the game in the final minute of the half.

Mahomes was chased by pressure and seemingly unable to see downfield. But with defensive end Jerry Hughes bearing down on him, Mahomes jumped in the air and fired a pass into the end zone, where wide receiver Byron Pringle caught it for a 2-yard touchdown.

ONCE YOU POP YOU CAN’T STOP!! @pringle_byron

The Bills tied it on a seven-play drive that ended with Allen finding receiver Gabriel Davis wide-open. Davis ran into the end zone for an 18-yard score. Allen made the throw with pressure in his face as the Chiefs sent seven pass-rushers on the play.

Allen went 9-of-11 with three touchdowns when teams sent seven or more pass-rushers in the regular season, the most completions and tied for the most touchdowns in that situation, per ESPN Stats & Information. Davis also had to jump to come down with the ball, but he was wide-open because Chiefs cornerback Mike Hughes fell down in coverage after running into a teammate.