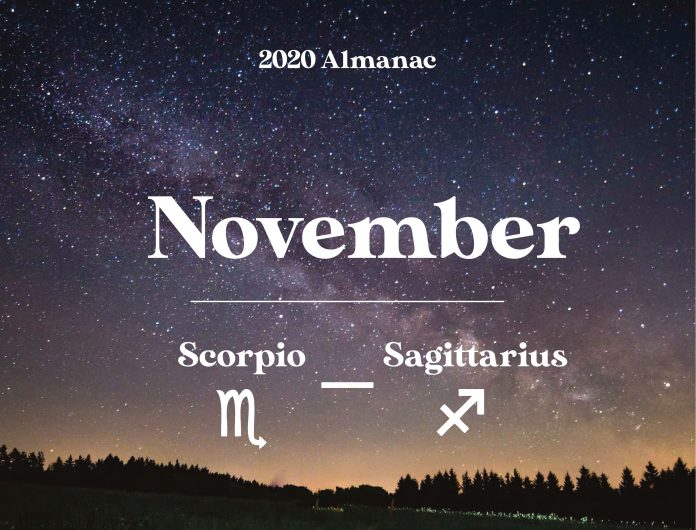 November is a least favorite month to many with its mostly cloudy and cooler weather, previewing colder and shorter days to come. One needs a jacket, with afternoon high temperatures typically below 50°F and early mornings often below freezing.  While the weather and changing seasons are fairly predictable, November 2020 is going to be a momentous month due to a worsening pandemic and an extremely important election. Usual seasonal activities of shopping frenzy and holiday parties will likely be on a smaller scale than in previous years.

Holidays and Observances in November

Many “normal activities” continue to be limited with social distancing and a pandemic not likely to disappear soon. Whether the public follows common sense and public health guidelines of wearing a mask in public and limiting social gatherings, including large family gatherings at Thanksgiving and Christmas, remains to be seen. Unfortunately, mask-wearing has become a political issue rather than a public health issue. If this continues, the Pandemic will last longer with increasing fatalities.

On most people’s minds is the Presidential election. The very poor response of the national government to the pandemic is a major issue, but there are other important implications. The current political polarization surpasses that of the 1960s, nearly equal to the 1850s-1870s. Whether this increases drastically as President Trump is most likely defeated remains to be seen.  From November 3, 2020, to January 20, 2021, will be among the most difficult days in our modern history, perhaps surpassing the agony of what President Ford called our “national nightmare” of the Watergate Era.

If President Trump’s most ardent supporters fail to recognize the election as legitimate, something the President himself has dangerously encouraged, our Constitutional Republic is in serious trouble. This could be exacerbated by the ramming through the third Supreme Court Justice appointed by the most divisive, corrupt, and incompetent President of modern times. Anything similar to the contested votes in Florida in the 2000 election, could lead to the Supreme Court decisions determining the outcome, something the President has overtly alluded to in public comments.

President Trump is not the cause of this polarization. Its modern roots include the creation of Fox News in the 1990s, the rise of the “Tea Party,” and the lack of political compromise in passing important legislation.  Ever since the Affordable Care Act was passed along strict party lines, the Republicans have vowed to “repeal and replace” it. For important legislation to succeed long term, compromise and bipartisan support are essential. Otherwise, each time party control of Congress or President occurs, chaos ensues as laws passed along party lines are strongly challenged.

These trends have been exacerbated by President Trump’s extremely unpresidential behavior with numerous insults of individuals, groups of people, and essential institutions, undermining the very foundation of what keeps our society politically functional. The “mainstream” Republican Party has been hijacked by a demagogue, enabled by a silent Republican leadership. None have had the backbone to speak out PUBLICLY against these many despicable comments, lies, and often personal attacks and insults, for fear of losing the support of their ultra-conservative (and often overtly racist) base. They are enablers, preferring to remain in power and avoid scathing attacks on themselves by a President clearly out of control.

Maybe true, but legendary is the comment Benjamin Franklin made when asked what sort of government was formed by the newly written Constitution. His reply was “A republic if you can keep it.” Very important words to remember as we cast a ballot in this crucial Presidential election and move hopefully towards a continued peaceful transition of power.

Rise and Set times of  Sun, Moon and Visible Planets, November 1, 2020,
The first day back on Eastern Standard Time

Venus hovers above Mercury from the 8th to the 18th. They are low on the horizon in the eastern pre-dawn sky about forty minutes before sunrise.  They are joined by the thin Crescent Moon between them on the 13th, and below them on the 14th. Mars is visible much of the night, though fading from its peak brightness of October. Saturn and Jupiter are visible in the western sky, setting earlier every evening. The Moon appears near them on the 18th and 19th.