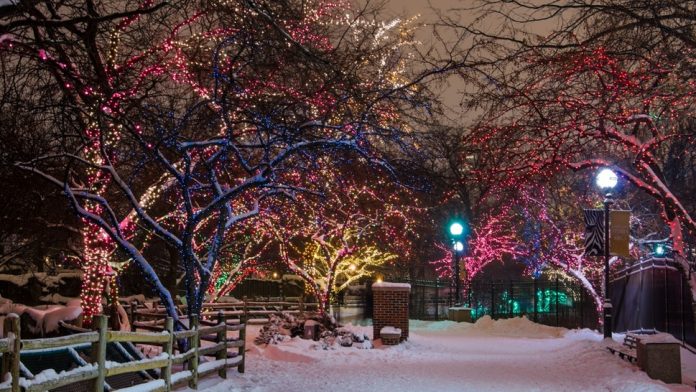 Winter officially begins with the winter solstice, but the cold started a little early this year. Average high temperatures in December are in mid-30’s °F, with a morning low averaging 20°F. On occasion, Christmas week can be bitterly cold, with a record low of -24°F on Christmas Day in 1980.

The sun sets early, before 5 PM. Dark afternoons and long evenings are brightened by Christmas lights put up commercially, on city streets and village squares, and at private homes. Many of these displays are lit from Thanksgiving to early January.

Holidays and Observances
in December

While this month is dominated by the holiday season, there are some other days of historical significance that deserve wider public observance. The attack on Pearl Harbor occurred early on Sunday morning, December 7, 1941, long before the immediacy of twenty-four-hour television. The magnitude of the attack came in slowly over radio and newspapers. All of the remaining World War II veterans are now in their 90s, so only a relative handful of those present remain alive. It is important that we continue to honor the victims of this attack and remember one of the most important dates in American history.

Another date of great significance in our history is Bill of Rights Day on December 15. On this date, in 1791, the state of Virginia became the eleventh state to ratify the first ten amendments of the United States Constitution, collectively known as the Bill of Rights. These amendments became a crucial foundation when affirming rights of religion, speech and gun ownership. At a time when the very foundations of our democracy, its checks & balances, and a free press, are under dramatic assault by an out of control president, it is essential that the rights of free speech be maintained. This has perhaps never been more important than now with presidential proclamations about the press being the “enemy of the people.” It should be recognized, however, that free speech does not include the right to yell “fire” in a crowded theater or to spread outright lies. According to the fact-checkers at the Washington Post, our president’s lies now number well over ten thousand.

With Christmas comes seasonal music over the airwaves on radio, beginning earlier and earlier, now before Thanksgiving on some stations. Much more interesting are the many live holiday concerts large and small in schools, churches and art centers. In the past, there have been tuba concerts at the Rome Capitol Theater and commercial sites in Utica, but as of this writing, it is unclear if this will occur locally this year. The Nutcracker, the Christmas themed ballet by Pyotr Ilyich Tchaikovsky, has long been a staple holiday treat at the Stanley Theater, this year it will be performed on December 7th and 8th. Back in November, The Syracuse University Brass Concert, held at Grace Episcopal Church in downtown Utica, presented over thirty brass players and two percussionists performing pieces from the Renaissance (14th – 17th century) to the 21st century, ending with a popular Christmas medley by Leroy Anderson.

Multi-planetary conjunction occurs on December 1, with (from uppermost to lowermost) Jupiter, Venus, Saturn, and a crescent Moon. This happens very low in the western sky. Another conjunction, Saturn and Venus, occurs in the western twilight of early evening on the 10th and 11th. The Geminid Meteor Shower occurs on the 13th, but with a full Moon in that part of the sky, visibility will be poor.

Rising / Setting Times of the Sun, Moon and Visible Planets on the Solstice (December 21)