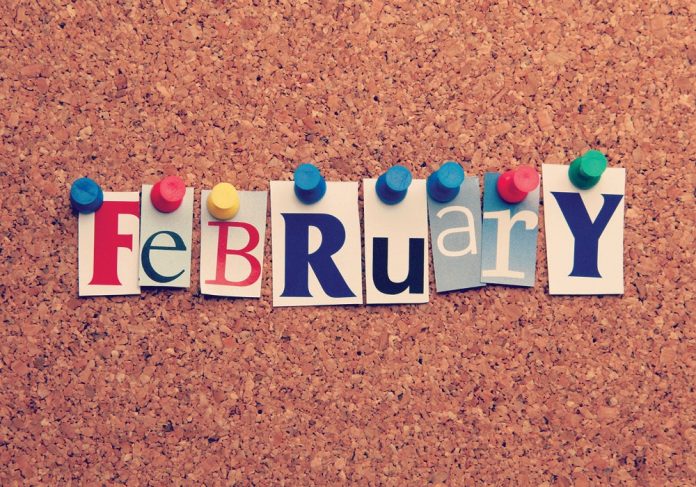 For those who like outside cold and snow, February is a good month for snowshoeing, snowmobiling, sledding, and skiing. For those who prefer indoor activities, there is basketball, high school, college, and professional hockey, theater productions by schools and theater companies, and classical, jazz, and folk music concerts. Presidents’ Day is the only official holiday, but February also has the popular cultural “holidays” of Groundhog Day and Valentine’s Day.

Holidays and Observances in February

Groundhog Day on February 2 is midway between the winter solstice of December 21 and the spring equinox of March 20. Many believe somewhat in this being an indicator of an early or late spring, depending on whether the groundhog sees his shadow or not. This Cross-Quarter Day is also known variously as St. Brigid’s Day, the Celtic Imbolc, or Candlemas. In all of its various names, it has long been celebrated as the coming of spring and longer days that are hopefully only a few weeks away.

Valentine’s Day on February 14 is a popular day for sweethearts, with exchanged gifts of chocolate, flowers, a romantic dinner, and sometimes, an engagement ring. Many men with a wife or girlfriend who forget this day risk the wrath of their lover.

If February has a “normal” cold spell, well below 0°F, it will seem unusually brutal compared to the often near-record warm days of January. Because of the usually snowy and cold weather, February has snowmobiling, sledding, and either Alpine or cross country skiing at Snow Ridge at Turin, Woods Vally or McCauley Mountain near Old Forge. There are many snow and winter festivals, some with skiing or snowmobile races. The ski resorts mentioned, Inlet’s Frozen Fire and Lights Festival (on February 29), Boonville and Cooperstown are popular centers for such winter events. Traditional ice harvest is usually held at Miller’s Mills on a Sunday in February but sometimes canceled if pond ice is not thick enough due to warm weather.

Presidents’ Day is the only official holiday for the month. This honors all Presidents, though some think it was a combination of Lincoln’s and Washington’s birthdays which were formally both formerly observed as holidays. This provides a three day weekend, and many of the regional winter festivals are on this weekend.

For those nature lovers who do not necessarily enjoy the snow and cold, bird feeders can bring nature close to one’s kitchen or living room window. Presidents’ Day Weekend has become the time for the Great Backyard Bird Count (http://gbbc.birdcount.org). This is held just prior to the beginning of the spring migration of birds.

Thousands of individuals make observations across North America and around the world that are usually submitted electronically. By comparing records of previous years with this brief snapshot in time, it is possible to recognize increasing or decreasing range or numbers, now possible much soon than was possible just a couple of decades ago.

Even for non-birders or those just starting to observe birds, participation is easy. A pair of binoculars and a field guide, along with a bird feeder or two are all that are needed. More information on how to begin this popular pastime is readily available through the website listed above, or a web search for the Audubon Society or Cornell School of Ornithology.

Early in the month, Mercury can be seen at its best for the year in the western early evening sky, below a much brighter Venus. In the eastern morning sky, Mars and Jupiter are joined by Saturn lower in the sky, and these three planets remain in a somewhat close cluster for most of the month. The waning Crescent Moon is quite close to Mars on the 18th, then to the right of Jupiter on the 19th, and finally just below Saturn on the 20th.

Rising and Setting of Sun, Moon, and Visible Planets on February 2, 2020