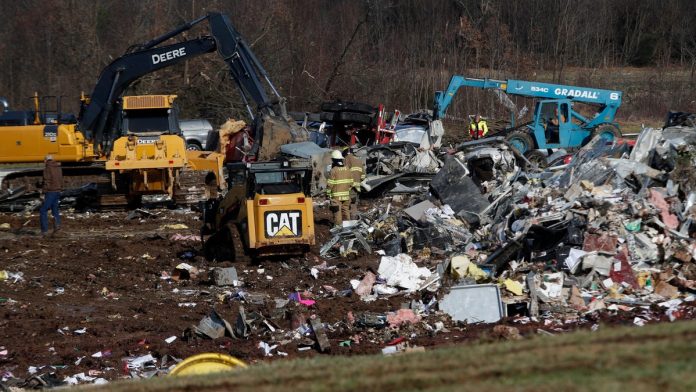 Survivors of the tornado that tore up parts of Kentucky recall moments during and after the storm hit.

Survivors of the tornadoes that ripped through several states last weekend picked through the rubble of their communities, homes and lives Monday amid hopes that the death toll, though stunningly high, could ultimately fall short of early fears.

Kentucky Gov. Andy Beshear said Monday that 64 deaths were confirmed in his state alone and that “undoubtedly there will be more.” He said the victims ranged in age from 5 months to 86 years, and that a fund for victims will pay $5,000 to the families for burial expenses.

More than 30 tornadoes late Friday and early Saturday also killed at least 16 people in Illinois, Tennessee, Missouri and Arkansas. Thousands more were left homeless; many more had no heat or water.

In Kentucky, Beshear said the death toll from the Mayfield Consumer Products plant could be fewer than initial estimates. Beshear had said Saturday that “at least dozens” of workers probably died in the candle factory. But he said Monday that state officials were working to corroborate information from the company that eight were confirmed dead, eight remained missing and more than 90 others had been located.

“We feared much, much worse, and again, I pray it is accurate,” Beshear said.

The governor said 105 people remained unaccounted for across the state, and that total damage costs are still being determined but are in the “hundreds of millions of dollars, at least.”

The White House announced that President Joe Biden will visit the state Wednesday to survey the damage. Biden previously offered condolences to the victims of the deadly storm and indicated he would travel to the heavily damaged areas once he was certain his visit would not impede recovery efforts.

The president also issued an emergency declaration for Kentucky to accelerate the availability of federal resources.

Homeland Security Secretary Alejandro Mayorkas and FEMA Administrator Deanne Criswell met with Beshear on Sunday and have held briefings with other state and local officials to assess the damage caused by the storms. Beshear, a Democrat, has lauded federal efforts to aid his state since the storm hit.

More: Path of ‘potentially historic’ 5-state tornado may go down as longest ever in US

Mayfield Mayor Kathy Stewart O’Nan said the fire station and city hall were destroyed. So were some historic downtown churches, she said.

“I don’t think there’s a pane of glass at any vehicle or property that the city owns that’s not shattered,” she said.

Firefighters in the town had to rip the doors off the fire station to get vehicles out, Fire Chief Jeremy Creason said on “CBS Mornings.”

“Words cannot describe the bravery, the selflessness that they’ve exhibited,” he said of his employees. “We had to try and navigate through all the debris up and down our streets. We were responding with ambulances with three and four flat tires.”

Surviving the tornado: Small-town residents anxiously wonder where they go from here

Mayfield devastated as tornado leaves trail of destruction in Kentucky

A tornado left a trail of destruction in the town of Mayfield, Ky. as it ripped through the state on Friday, Dec. 10.

A combination of the main tornado’s enormous path as it tore from Arkansas to Kentucky, its sheer power and the high number of smaller whirlwinds that accompanied it made for an overwhelming force that left devastated communities in its wake.

The tornado’s path extended for about 223 miles, four more than the record of 219 set by the so-called tri-state tornado on March 18, 1925, which ripped through parts of Missouri, Illinois and Indiana.

In Illinois, Edwardsville Police Chief Mike Fillback said late Sunday they had picked through the rubble of a partially collapsed Amazon warehouse and believed the death toll of six was final.

Amazon said it was providing $1 million toward tornado relief in the area. Amazon founder Jeff Bezos tweeted that he was “heartbroken over the loss of our teammates there, and our thoughts and prayers are with their families and loved ones.”

National Weather Service confirmed that it was a category EF-3 tornado with winds reaching 150 mph. Kelly Nantel, director of national media relations for Amazon, told the Belleville News-Democrat that tornado sirens were heard shortly after 8 p.m. Friday and the tornado struck the building at 8:27 p.m. The procedure calls for workers to go to “designated” areas.

In Illinois: Victims identified after 6 die in Amazon warehouse blasted by tornado

In Tennessee, the National Weather Service confirmed Sunday at least seven tornadoes touched down Saturday morning. Two people were killed in Lake County, one in Obion County, and another in Shelby County.

In Missouri, Gov. Mike Parson visited hard-hit areas in St. Charles and Pemiscot counties Sunday. His office put the state death toll at four: in Pemiscot County, a young child killed at home, a semi-truck driver on I-55 and a motorist on Missouri Route 84, and a woman at home in St. Charles County.

In Arkansas, one person died when a tornado slammed a nursing home in Monette, a town of about 1,500 people 60 miles north of Memphis. Gov. Asa Hutchinson said staffers at the home used their own bodies to shield residents from the carnage.

A photo dating to 1942 that was in a home in tornado-battered Dawson Springs, Kentucky, was blown all the way to New Albany, Indiana, 130 miles away.

Katie Posten found the photo near hear home – on the back it said, “Gertie Swatzell & J.D. Swatzell 1942.” She posted an image of the photo on Facebook and Twitter and asked for help in finding its owners. Cole Swatzell commented that the photo belonged to family members in Dawson Springs.

The fact that the photo traveled almost 130 miles is “unusual but not that unusual,” said John Snow, a meteorology professor at the University of Oklahoma.

“It gets swirled up,” Snow said. “The storm dissipates and then everything flutters down to the ground.”