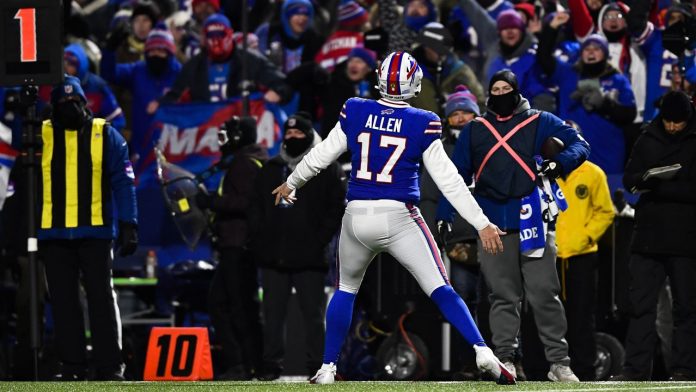 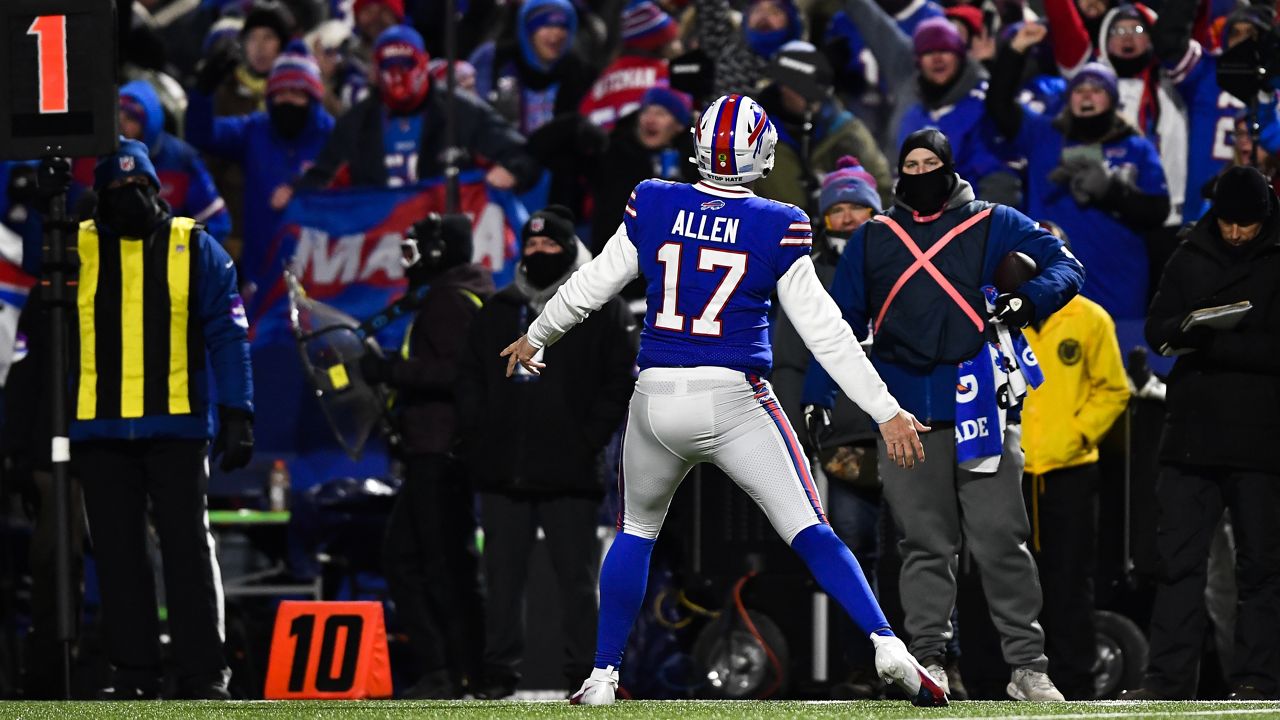 ORCHARD PARK, N.Y. (AP) — Josh Allen and the Buffalo Bills erased any doubt of who now rules the AFC East.

Allen set a team playoff record with five touchdown passes, including two to Dawson Knox, and Devin Singletary ran for two scores in the first half of a 47-17 throttling of the division rival New England Patriots in a wild-card playoff game Saturday night.

Allen finished 21 of 25 for 308 yards in a game Buffalo scored on each of its seven possessions that didn’t end with a kneeldown.

The Bills beat New England for a second time in three weeks and rebounded from an embarrassing 14-10 loss at home on Dec. 6 in which the Patriots attempted just three passes while finishing with 222 yards rushing to counter the blustery conditions.

The margin of defeat was the largest for New England in coach Bill Belichick’s tenure, which began in 2000.

Though the winds were relatively calm Saturday, the Bills were hot in frigid conditions, with a game-time temperature of 7 degrees.

The third-seeded Bills advanced to the divisional round to host either the Cincinnati Bengals, who beat the Raiders earlier in the day, or travel to Kansas City, depending on the outcome of the Chiefs game against Pittsburgh on Sunday. A trip to Kansas City would feature a rematch of last year’s AFC championship game, which the Chiefs won 38-24.

Buffalo gained 300 yards of total offense, had 19 first downs and built a 27-3 lead at halftime. The 30-point margin of victory and 47 points scored were the second most by the Bills in a playoff game behind a 51-3 win over the Los Angeles Raiders in the AFC championship game on Jan. 20, 1991.

The Bills rolled into the postseason by winning their final four games to clinch their second consecutive division title. After losing 35 of 40 meetings to New England from 2000 to 2019, Buffalo has now defeated the Patriots in four of the past five meetings, coinciding with Tom Brady’s departure to Tampa Bay.

The Patriots limped into the playoffs by losing three of their last four, and were effectively outclassed in rookie Mac Jones’ postseason debut.

New England’s previous worst playoff loss under Belichick was a 33-14 defeat to Baltimore also in the wild-card round on Jan. 10, 2010.

Jones struggled in finishing 24 of 38 for 232 yards with two touchdowns to Kendrick Bourne, including a 4-yarder in the final two minutes. Jones was also intercepted twice in closing his season with a combined seven touchdowns passing and seven interceptions in his final five outings.

The Bills put the Patriots on their heels from the opening drive, with Allen patiently waiting in the pocket before scrambling to his right and avoiding a sack. Before stepping out of bounds, Allen lobbed an 8-yard pass to a wide-open Knox in the back right corner of the end zone.

Buffalo’s defense then snuffed out the Patriots’ opening drive with Micah Hyde having the speed and angle to make a leaping interception in snatching the ball away just before Nelson Agholor was about to catch it in the end zone. Jones was also intercepted on New England’s opening drive of the second half, when his pass intended for Hunter Henry was deflected by linebacker Matt Milano and picked off by Levi Wallace.

No series was more indicative of New England’s flat-footed performance than allowing Singletary to score on a 16-yard run to cap a four-play, 89-yard scoring drive to put Buffalo up 27-0 with 1:53 left in the first half. Allen placed a perfect 45-yard pass to Stefon Diggs, who had a step on New England’s top defensive back J.C. Jackson, a Pro Bowl selection, up the right sideline. Two plays later, Singletary eluded the entire Patriots defense in reaching the end zone.

Folk’s 44-yard field goal with 1 second left in the first half extended his streak to 56 attempts made from under 50 yards. That matched the NFL record set by Tennessee’s Ryan Succup, whose mark spanned the 2014-17 seasons. Folk hasn’t missed a field goal attempt of 49 yards or less since missing a 45-yarder in the 2020 season opener against Miami.

The game was the fourth-coldest in Bills history with a game-time temperature of 7 degrees, and the wind-chill making it feel like minus-4.

The coldest game was played 28 years ago to the day in Buffalo’s 29-23 win over the then-Los Angeles Raiders 29-23 in a divisional playoff game en route to the Bills make their fourth consecutive — and last — Super Bowl appearance. The game-time temperature was zero, with the wind-chill making the conditions feel like minus-32.

Bills: Travel to face either Kansas City Chiefs or host the Cincinnati Bengals.

Facebook
Twitter
Previous articleI’m a New Yorker who visited Charleston, South Carolina, for
Next articleTaylor: Playoff win a credit to Bengals’ faith in me