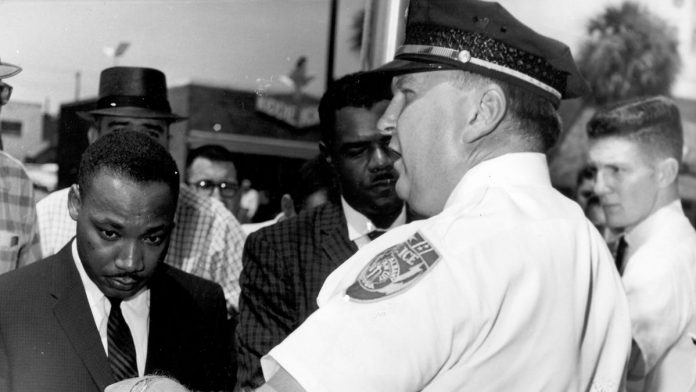 Three days before his historic ‘I Have a Dream’ speech, Dr. Martin Luther King, Jr. urged the civil rights movement not slow down but push forward. King was interviewed on NBC ahead of the March on Washington. (Aug. 25)

Martin Luther King Jr. was a rising civil rights figure when he came to Albany, Georgia, in December 1961, keen to provide a shot in the arm to a desegregation movement that was gathering new steam.

Amid the 60th anniversary of King’s involvement in the Albany Movement, some say its legacy has been misunderstood. For example, King’s Albany experience helped sharpen tactics that he would later apply in more successful campaigns.

“It was not one of his finest moments,” said Robert Pratt, a history professor at the University of Georgia at Athens. “But he learned from the lessons of Albany and would choose his targets a bit more carefully moving forward.”

The Albany Movement was also important because it showed what determined local activists could accomplish in the face of great adversity.

“It’s not (just) a chapter in the civil rights movement, it’s a chapter in the long history of the African American freedom struggle in southwest Georgia,” said Lee Formwalt, retired executive director of the Albany Civil Rights Institute and author of “Looking Back, Moving Forward: The Southwest Georgia Freedom Struggle, 1814-2014.”

Formwalt said people had been fighting for equality in Albany for years, even decades, before King arrived – and the activism continued once he was gone. In time, reformers would chip away at a stubbornly segregated system.

The Albany Movement was unique for its ambitious goal of total desegregation rather than a single cause like integrating lunch counters or buses, a factor in King’s struggles.

In Montgomery, Alabama, for instance, King gained prominence after leading a successful bus boycott in 1955; six years later, activists conducted Freedom Rides throughout the South to challenge segregated interstate travel. But in Albany, everything from Black voting power, improving neighborhoods and desegregating restaurants, public facilities and services was in play.

Seven Days of 1961: Americans stood up to racism and changed history. This is their fight, in their words.

Never Been Told: These stories fill in the full history of American people of color.

In an interview with Playboy published in January 1964, King said the broad approach hampered efforts.

“Our protest was so vague that we got nothing,” King said. “It would have been much better to have concentrated upon integrating the buses or the lunch counters. One victory of this kind would have been symbolic, would have galvanized support and boosted morale.”

Reflecting on Albany’s failures, King told the magazine, helped him prepare for his anti-discrimination campaign in Birmingham, Alabama, months later.

“Our appraisals not only helped to make our subsequent tactics more effective but revealed that Albany was far from an unqualified failure,” he said.

A region beset by racism and violence

Albany lay in the heart of southwest Georgia, a hotbed of racism, Klan violence and police brutality. More than 120 Black people were lynched in the region from 1880 to 1930, Formwalt said.

A post-World War II economic boom fueled rising numbers of Black residents, and by 1960, they formed 40% of Albany’s population of 50,000.

The growing Black communityin Dougherty County had no political representation. Attempts to change that were met with hostility.

“This was a time where if you were Black and tried to register to vote, you could be killed,” Pratt said. “Voting in the Deep South in the 1950s was no insignificant act.”

“I would meet with a core group of teens who worked with us,” recalled Holsaert, now 78 and living in North Carolina. “They did canvassing for voter registration until dusk. Those youngsters were really the backbone of our work.”

“He (Pritchett) knew that King’s movement relied on some level of brutality and the national media,” Pratt said. “His strategy was to beat King at his own game.”

‘It could have gotten very ugly’

Pritchett had studied nonviolent protest methods and arrested protesters peacefully – at least for the cameras – to minimize publicity. When jail cells filled with marchers, Pritchett arranged to use cells in surrounding counties to avoid overcrowding.

Barrett, now 83 and living in New Jersey, approached City Hall one day when Pritchett appeared outside.

“I was accompanying Black people to register to vote, where they weren’t welcome,” she said. “He (Pritchett) boldly called me a m—– f—–Northern agitator. That’s a comment I’ve never forgotten.”

Holsaert recalled one arrest: As the only white woman in her group, she said, she was separated, then interrogated and fondled in a station room by menacing police officers.

“It was scary,” she said. “I had put my toothbrush in my brassiere, which is what women did when they knew they were going to be arrested, and they found that by patting me down. It could have gotten very ugly, but somebody reined it in, and they stopped short of really attacking me.”

For Albany’s Black citizens especially, the threat of violence lingered – though mostly behind closed doors. Marion King, the then-pregnant wife of Albany Movement vice president Slater King, was beaten and kicked so severely by police in Camilla, 30 miles south of Albany, that she lost her unborn child.

Meanwhile, Slater’s brother C.B. King, an attorney who represented many of those jailed, was viciously caned by Dougherty County sheriff Cull Campbell while trying to visit William Hansen, a jailed white protester who himself had been beaten by inmates who saw him as a traitor to their race.

About 1,200 protesters were arrested during King’s run – but without the images of public brutality that would sway opinion in places like Birmingham, the effort gained little national traction. Still, city leaders realized that King’s presence was luring more people into the movement.

They brokered a deal, agreeing to enforce the Interstate Commerce Commission’s ban on segregation in interstate travel if King would leave town.

King complied. But Pritchett’s forces failed to follow through.

While King would return and be arrested again in summer 1962, the movement’s slow progress was dampening enthusiasm. The writing was on the wall.

“He (Pritchett) thought, as soon as King realizes he’s not going to achieve a significant victory, he will leave,” Pratt said. “And that’s exactly what happened.”

A community united and empowered

In 1976, Sherrod was elected a city commissioner. In 1993, the state’s 2nd Congressional District, encompassing much of southwest Georgia, made Sanford Bishop its first Black representative, a position he still holds.

“You can’t say there was outright success, but you’ve had Black city councilmen, a Black mayor and integration,” said James Wall, an adjunct history professor at Angelo State University in San Angelo, Texas. “If you go to Albany today, they want to talk about the movement. They’re proud of it, and they should be.”