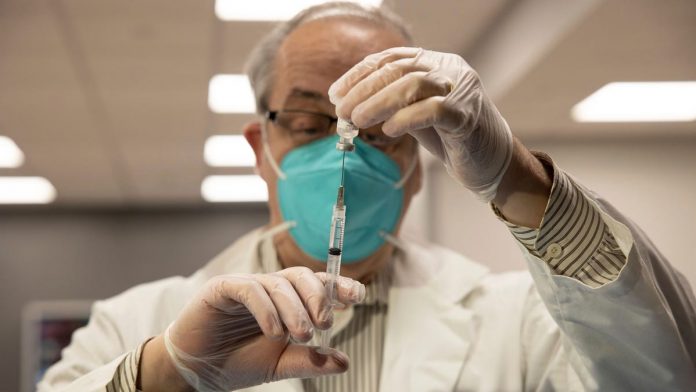 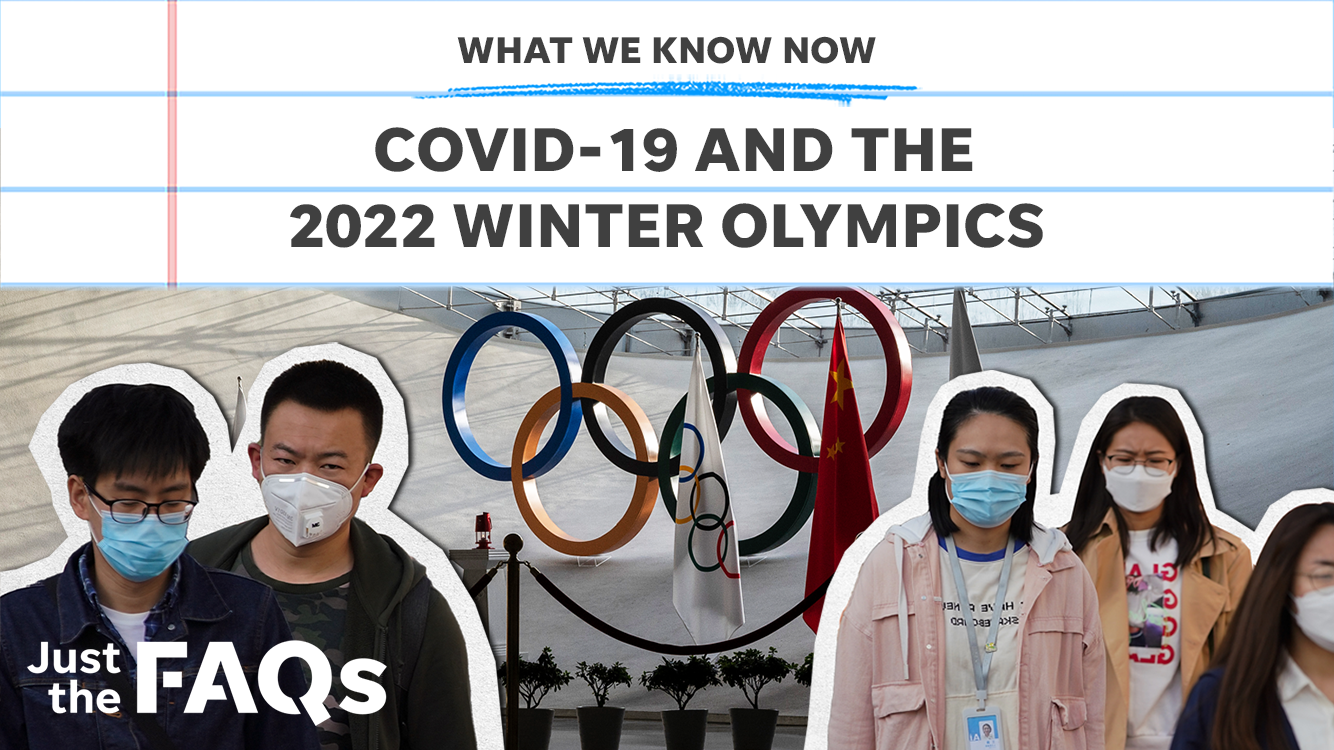 The Winter Olympics will look different this year with strict COVID-19 guidelines in place as China battles an omicron outbreak.

“We can’t guarantee there won’t be a bug or two,” Psaki said, “but the best tech teams across the administration and the postal service are working hard to make this a success.”

Some users immediately identified at least one problem: Orders made by different people living in the same apartment building but in different units were rejected as duplicate, according to some tweets. Americans are supposed to be able to order up to four kits per address. Once ordered, tests are to be mailed within 7-12 days.

The website is expected to officially launch mid-morning Wednesday.

The Biden administration is buying 1 billion tests to distribute through the website and a phone line. Some tests are being reserved to prioritize households in the hardest-hit and highest-risk communities.

The White House is ramping up efforts to make testing more accessible and affordable after facing criticism from both Republicans and Democrats over a lack of tests amid surging coronavirus rates.

►New York is the third state to report more COVID-19 cases already in 2022 than in all of 2020, a USA TODAY analysis of Johns Hopkins University data shows. Hawaii and Vermont have also surpassed their 2020 counts.

►Tickets to the upcoming Winter Olympics and Paralympics in Beijing won’t be sold because of the “current grave and complicated situation of the COVID-19 pandemic,” said officials in China, where the discovery of the first omicron variant infection Saturday has led to increased efforts to prevent the virus from spreading.

►Authorities in Hong Kong plan to kill some 2,000 small animals after several tested positive for the coronavirus at a pet store where an employee also tested positive. Hong Kong will also stop the sale of hamsters and the import of small mammals.

►Canada approved use of the antiviral pill Paxlovid, created by Pfizer, to treat people with COVID-19. The U.S. approved its use in December.

Today’s numbers: The U.S. has recorded more than 66 million confirmed COVID-19 cases and more than 851,000 deaths, according to Johns Hopkins University data. Global totals: More than 330 million cases and over 5.5 million deaths. More than 208 million Americans – 62.9% – are fully vaccinated, according to the Centers for Disease Control and Prevention.

What we’re reading: Many parents are “just trying to stay afloat” as omicron is forcing day care centers to close in droves across the country. Read the full story.

Refresh this page for the latest news. Want more? Sign up for USA TODAY’s free Coronavirus Watch newsletter to receive updates directly to your inbox and join our Facebook group. Or check out our resource guide to the coronavirus pandemic here.

It’s too soon to know whether the omicron variant will be the final phase of the COVID-19 pandemic, Dr. Anthony Fauci, head of the National Institute of Allergy and Infectious Diseases, said Monday.

There are two ways for a pandemic to end: the infectious disease is eliminated, like measles, or it becomes endemic, which means it still exists without major disruption to society, much like the flu.

“If you look at the history of infectious diseases, we’d only eradicated one infectious disease in man and that’s smallpox,” Fauci said at the World Economic Forum. “That’s not going to happen with this virus.”

That means COVID-19 must evolve into a less dangerous disease for the pandemic to officially end. Although the highly contagious omicron variant is spreading quickly — infecting about 782,000 Americans per day, according to the CDC — some point to its low mortality rate as a sign that the virus may be becoming less severe.

It’s possible that omicron could signal that the pandemic is ending, “but that would only be the case if we don’t get another variant that eludes the immune response,” Fauci said.

New York City’s public schools are “exploring” a remote learning option amid the omicron surge as roughly a quarter of students in the district weren’t in school last Friday, Chancellor David C. Banks said at a news conference Tuesday.

Local news outlets Gothamist and CBS New York reported the city had changed its attendance policy to allow more students to learn remotely during the surge. Banks said no change in remote learning policy was set to be announced, but said the city’s schools were providing an “on ramp” to the classroom by allowing more students to be marked as present while receiving instruction online.

Mayor Eric Adams, who has vowed to keep schools open while other school systems face closures, said any remote learning option is intended for students who have tested positive and cannot attend school in person, “not for the general population.”

Around 75% of the school district’s more than 1 million students were in class Friday, according to Department of Education attendance data. Banks said meetings with the United Federation of Teachers, which represents most of the district’s teachers, remain ongoing.

A record-high 74 people died due to COVID-19 in Australia on Tuesday, the largest single-day tally in the country since the start of the pandemic, as hospitals are facing a surge of patients and staffing shortages.

“We’ve reached a point in our healthcare system where it’s juggling extreme workforce shortages … alongside a vast number of patients with COVID-19 who require hospitalization, alongside that an extraordinary workforce that are absolutely exhausted,” said James Merlino, the acting health minister in Victoria, where the government last week declared an emergency for some of its hospitals.

Federal Health Minister Greg Hunt said there were signs that New South Wales’ infection rate was peaking and Victoria was near a plateau. The New South Wales government has said it has ruled out a return to lockdown.

Research from New Mexico State University found pandemic-fueled, stress-related unhealthy eating habits in Americans. Now, a study co-authored by a researcher from the NMSU Department of Public Health Sciences shows nearly half of all adults in the United States gained weight during the first year of the pandemic.

The new findings were part of a national assessment on weight gain in America conducted by a research team that included Jagdish Khubchandani, a public health professor at NMSU.

The study, published in “Diabetes and Metabolic Syndrome: Clinical Research and Reviews,” included 3,473 adult participants. The results show 48% of the study group reported gaining weight during the first 12 months of the pandemic, from March 2020 to April 2021.

Participants who reported weight gain were more likely to be males, white or Hispanic, married, 45 years old or older, working full time, have less than a college education, or living in southern and western states or rural areas of the U.S., according to the study.

COVID-19 infections are soaring again at U.S. nursing homes because of the omicron wave, and deaths are climbing too, leading to new restrictions on family visits and a renewed push to get more residents and staff members vaccinated and boosted.

Nursing homes were the lethal epicenter of the pandemic early on, before vaccines allowed many of them to reopen to visitors last year. But the wildly contagious variant has dealt them a setback.

Nursing homes reported a near-record of about 32,000 COVID-19 cases among residents in the week ending Jan. 9, an almost sevenfold increase from a month earlier, according to the CDC.

A total of 645 COVID-19-related deaths among residents were recorded during the same week, a 47% increase from the earlier period. And there are fears that deaths could go much higher before omicron is through.

Despite the rising numbers, the situation is not as dire as it was in December 2020, when nursing home deaths per week topped out at about 6,200. Experts credit the high vaccination rates now among nursing home residents: About 87% are fully vaccinated, according to CDC data.