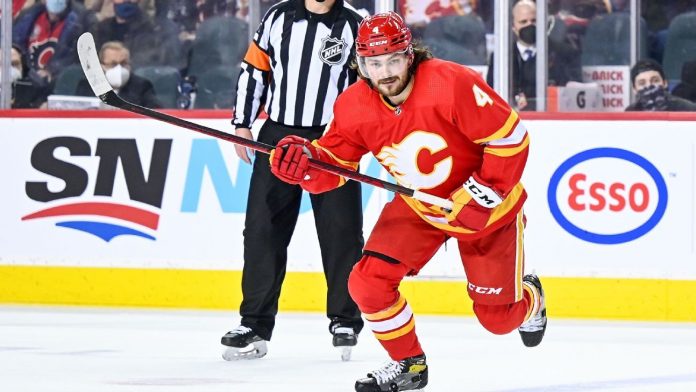 Here we are, standing on the cusp of some pretty non-standard NHL scheduling, to put it lightly. The ESPN.com fantasy game managed to cope with the NHL’s massive schedule shift by adding some weeks here in February we weren’t supposed to get. If you missed the news and want to see the nuances of it, it was announced here.

What this leaves us with, is a two-week scoring period that includes an all-star game break and during which the Canadian NHL clubs are extra busy. Many of these games were the ones cancelled during the COVID shutdown, or were moved around because of it. As such, Canadian clubs have a few extra games because more of them were cancelled.

But that’s not the headline. The disparity here is enormous. We have a range of scheduled games from one all the way up to seven during this scoring period. Head-to-head leagues need to take extra time setting up their roster for this one. Because this scoring period can do so much good (or so much damage) to your fantasy season depending on the outcomes, let’s take some extra time to look at the schedule.

Standing alone on top of the mountain of games are the Ottawa Senators, who will play seven times during this scoring period. Five of those games will come at home.

Only one of those games, however, creeps into the red zone for offense on the forecaster. But there’s something to be said for quantity over quality in a case in which the quantity is so overwhelming.

Of course, Drake Batherson is out for the next two months with a high-ankle sprain, but that actually opens the door to find someone at the top of the offense that isn’t already rostered in your league. The gut reaction is to perhaps grab Tyler Ennis, who posted a hat trick in the game that Batherson was hurt and then played the next contest on a line with Brady Tkachuk. But I’d rather try out Alex Formenton, who has been slowly heating up since the start of the year in spit of inconsistent use. Formenton has scored a point in seven of nine January games, collecting three goals and six assists. With seven games on tap and a gaping hole on the top line, he seems like a natural choice.

Tyler Ennis puts the Senators up 5-0 as he completes the hat trick in the final minute of the victory.

But before you get into the weeds with Formenton, make a quick stop to check on whether you play in one of the 50 percent of leagues in which Tim Stutzle is available. He is a lock for top-six minutes and power-play time, but is less likely to be available.

And with this many games, make sure you use hit/blocked shot machine Artem Zub. And while it might be tempting looking at his recent totals, Matt Murray‘s average is spiked by that shutout of the Buffalo Sabres. There are zero well-rated defensive games in this seven-game slate, so I wouldn’t touch the goaltending.

It’s no seven, but six is still pretty good

The New Jersey Devils are next on the quantity list with six games. Only two of them are at home. But, once again, the quantity is so great here, we can overlook the Devils poor road record.

Jesper Bratt, all day. He’s already firmly on the radar with his recent play as Jack Hughes‘ linemate (four goals, seven points in five games). Let this extended schedule be the reason you add him and hold him for the foreseeable future.

Dougie Hamilton is back at practice in a non-contact jersey, but that doesn’t mean his return from a broken jaw is imminent. Keep starting Damon Severson, who has picked up four power-play points in the past five games.

The Calgary Flames, Edmonton Oilers, Toronto Maple Leafs and Vancouver Canucks all have five games apiece…as do the Arizona Coyotes and Washington Capitals, but let’s not let them muddy the subhead theme.

These five-game sets are where we actually find some of the top-rated teams on the forecaster this scoring period, given the quality and quantity combination. The Flames and Leafs are poised for big fantasy showings with some solid matchups sprinkled into their busy weeks.

Rasmus Andersson has slowly crept into must-start territory as the power-play quarterback for the Flames. He’s averaged 2.1 fantasy points per game for the past month, which is top-25 territory if he keeps it up. It might even be worth dipping into the second line given the schedule. Mikael Backlund and Blake Coleman have both been producing better of late with both of them sitting among the top 40 in shots on goal for the month of January (a hat tip to their crushing of the Blue Jackets this week for that).

The Leafs have equally as many in roads for a fantasy boost, with both Ondrej Kase and Ilya Mikheyev receiving new top-six roles.

Four is the new three

While you normally only start thinking about benching some players for the week if their club has fewer than three games, this scoring period shifts that benchmark up. If your player isn’t one of the already mentioned teams, he needs to play for the Boston Bruins, Carolina Hurricanes, Chicago Blackhawks, Columbus Blue Jackets, Dallas Stars, Detroit Red Wings, Montreal Canadiens, New York Islanders, Pittsburgh Penguins or Winnipeg Jets to be worthy of normal consideration.

So while the Sabres, Colorado Avalanche, Nashville Predators, Philadelphia Flyers, Seattle Kraken, Tampa Bay Lightning and Vegas Golden Knights have three games each, three just doesn’t cut it for automatic consideration. Does three games of Roman Josi at 2.7 fantasy points per game (FPPG) definitely beat six games of Ryan Graves at 1.7 FPPG? Not mathematically, it doesn’t. But you need to do that calculation outside of a vacuum by looking at your entire roster. The point is: Three games doesn’t mean auto-start this week.

That’s not very many games

The Anaheim Ducks, Florida Panthers and St. Louis Blues play only twice during this scoring period. But that seems like a lot compared to the Los Angeles Kings, New York Rangers and San Jose Sharks, who only play once.

This is a case where you may just want to bench them all if you don’t have daily lineup changes. It seems silly to bench players like Adam Fox (who may miss the one game anyway), Chris Kreider or Aleksander Barkov, but if you aren’t dealing in games-played limits, there is no reason to take one game from a superstar when you could take five to seven games from any other player.

There is a limit to this logic, as it’s not worth putting a key asset on the free-agent pile and risk another manager picking them up. So your bench is likely your limiting factor when it comes to how much room you can make for more games played. But this is absolutely a scenario where Ennis playing seven times trumps Jonathan Huberdeau playing twice.

Evander Kane, W, Edmonton Oilers: What are you waiting for? Pick him up and pick him up now. This is the kind of winger to center upgrade that makes me recall the Joe Thornton trade to San Jose so fondly from a fantasy perspective. Whatever you think of him off the ice, Kane has the potential to put up Jonathan Cheechoo-esque goal scoring with Connor McDavid and/or Leon Draisaitl. (I just realized McDavid was eight years old when that trade went down … sigh.)

Andre Burakovsky, W, Colorado Avalanche: In the least surprising news ever for anyone that saw the photo of him after the hit, Nathan MacKinnon has a broken nose. It’s tough to say how long that will keep him out, as he could potentially return with a face shield. But, in the meantime, Burakovsky gets some significant power-play time on the top unit. If we get a MacKinnon timetable that is in the “weeks” range, Burakovsky is a must-start.

Brent Burns, D, San Jose Sharks: It’s not the Burns of old, but he’s held firm as the No. 12 overall defenseman for fantasy points this season. But with news that Erik Karlsson is out for almost three months and noting that the Sharks only have one game during the next scoring period, there’s an opportunity here. Burns should get a boost to production from being the only one on the blue line for the Sharks top power-play unit. If you want until this scoring period is almost over to strike, you can make a trade that becomes extra advantageous because he languishes on an opponent’s roster during this downtime.

Chandler Stephenson, C, Vegas Golden Knights: With Max Pacioretty and Mark Stone both healthy now, Stephenson should be back in fantasy lineups (when the schedule dictates it). But the clock is ticking. Reports are varying wildly about the timing of a Jack Eichel return, but I have a sneaking suspicion his recovery will miraculously coincide with the trade deadline, given the amount of salary the Knights have to shed to activate him. So Stephenson should be in lineups, but with the knowledge that he’ll turn into a pumpkin around March 21…or whenever Eichel returns (but let’s not kid ourselves, it’ll be March 21).