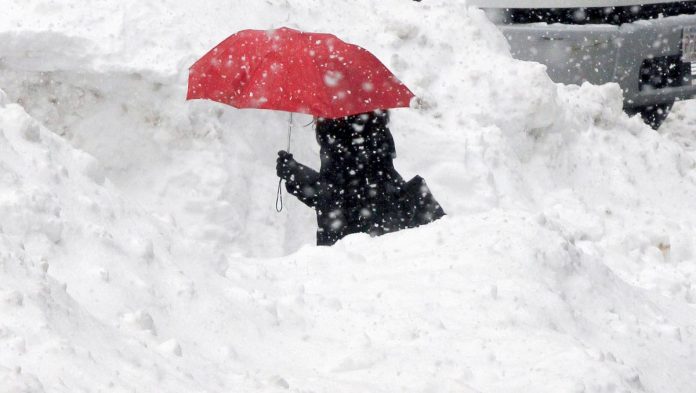 AccuWeather Chief Meteorologist Bernie Rayno weighs in on the latest winter storm as it closes in on the Northeast later this weekend.

A powerful nor’easter was forecast for the Mid-Atlantic and Northeast from Friday night into Saturday, a storm that’s predicted to bring blizzard conditions to coastal areas from Virginia to Maine.

In all, over 75 million Americans were under some level of winter weather alert as of Friday afternoon. This included the Chicago metro area, which was seeing its own lake-effect snowstorm Friday.

Speaking about the East Coast storm, AccuWeather chief meteorologist Jon Porter said it will be “a dangerous, life-threatening storm,” bringing a blizzard to some areas, particularly in southern New England.

“Bands of heavy snow will develop in eastern New England during the heart of the storm that can produce 2 to 4 inches of snow per hour – extremely intense snowfall rates,” he added. “There will also be the potential for thunder and lightning associated with these intense bands.”

Chicago is getting pummeled by lake effect snow. What is it and how does it happen?

Officials also said wind-blown snow could make travel “nearly impossible.” Forecasters say the storm could unload over 3 feet of snow and up to 90-mph winds as it pounds eastern New England.

A powerful Nor’easter is expected to develop off the Mid-Atlantic coastline today before impacting eastern parts of the Northeast and New England this weekend. Numerous hazards are likely from heavy snow, with significant accumulations, to gusty winds and coastal issues. pic.twitter.com/FQ3wXSyCYi

The strong winds raised concerns about the potential for power outages. The Eversource utility company, which serves much of New England, has secured hundreds of extra repair crews and is placing them in locations that are expected to be hardest hit by the storm.

“Significant beach erosion and coastal flooding will also be a concern from the storm, the National Weather Service said.

Colder forecast temperatures after the storm mean dangerous wind chills are possible Saturday night. In Boston, wind chills could dip as low as seven below zero.

“This has the potential to be a historic storm,” Boston Mayor Michelle Wu said during a news conference Friday morning. “A huge one.”

A snow emergency goes into effect in Boston at 9 p.m., when parking will be banned on major city streets.  The city has not seen a snowstorm deliver more than 2 feet of snow during the month of January. If amounts exceed 28 inches, which is possible, it would become the city’s biggest snow event on record, Axios reported.

New York City, meanwhile, could see up to a foot of snow from the storm, the National Weather Service predicted.

The storm is classified as a nor’easter, named because of the direction that the winds blow as the system moves up the coast. It’s also likely to become a “bomb cyclone,” a storm that rapidly intensifies as it undergoes “bombogenesis.”

WHAT IS A NOR’EASTER? Storms can batter East Coast with snow, impact millions of people