Connecticut teenager dies days after overdosing on fentanyl at school, 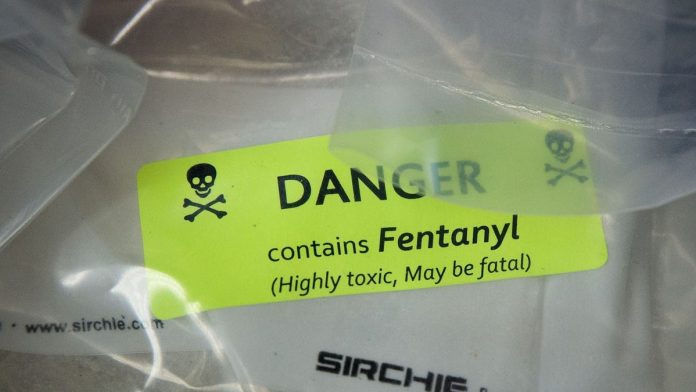 A 13-year-old who was hospitalized for an apparent fentanyl overdose at a Connecticut middle school died on Saturday, police said.

The incident occurred Thursday at the Sports and Medical Science Academy in Hartford, Connecticut. Around 10:30 a.m., the 13-year-old student collapsed inside a school gymnasium, which a school nurse responded to and began CPR before emergency officials arrived, Hartford Police Department Lt. Aaron Boisvert said.

The teen was revived by emergency responders, as police said the teen had overdosed on the opioid fentanyl.

The 13-year-old and two other students were taken to a local hospital while the school was placed on a soft lockdown. The other two students were later released, as students and faculty were required to decontaminate their shoes before leaving in case they had been exposed to the drug.

Police said the 13-year-old succumbed to his injuries and died shortly after 5:30 p.m. Saturday, according to the Associated Press. His name has not been released because of his age.

WHY IS FENTANYL SO DANGEROUS?: The illicit drug has ruined lives during COVID pandemic

“Our city grieves for this child lost, for his loved ones, his friends, his teachers, and the entire SMSA family,” Harford Mayor Luke Bronin said in a statement. “We still have much to learn about the circumstances of this tragedy, and about how a child had access to such a shocking quantity of such deadly drugs, and our police department will continue their investigation and seek to hold accountable the adults who ultimately are responsible for this child’s death.”

Boisvert told WVIT that police searched the school and found 40 small bags of fentanyl in powder form in two classrooms and the gymnasium. Authorities said they believed the drugs were brought in by the 13-year-old, and Bronin said the student did ingest the drug.

FENTANYL ADDICTION IS KILLING MY SON: But California drug laws enable him instead of helping.

Fentanyl is an opioid much more powerful than heroin and morphine. Because tiny amounts can create the same highs for users, it’s a cheaper and more appealing option for drug deals, Dr. Nora Volkow previously told USA TODAY. The U.S. Drug Enforcement Administration says a fatal dose of fentanyl is small enough to fit on the tip of a pencil.

Although lethal, many organizations have said a person cannot die from coming in contact with fentanyl. The Drug Policy Alliance said on Twitter Saturday “it is not possible to overdose on fentanyl or fentanyl analogues through accidental skin contact or from close proximity alone.”

It is unknown how the teenager obtained fentanyl. The case remains under investigation, police said.

Facebook
Twitter
Previous articleBengals’ Taylor delivers a game ball to local bar
Next articleFact-check: Are you 17 times more likely to be hospitalized