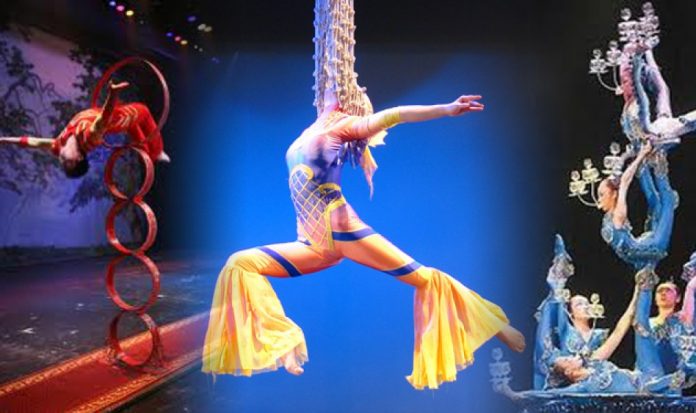 Sunday, March 11th at 7:30pm at The Stanley Theater, Utica

Tickets for Stanley Member will be on sale Tuesday, December 19th and Wednesday, December 20th. Tickets will be available to the general public on Thursday, December 21st. With an array of the world’s greatest acrobatics, contortionists, aerial artists, jugglers and entertainers, Cirque D’Or has entertained fans around the world for ten years.  Each Cirque D’Or performance integrates many circus styles from around the world, with its own central theme and storyline.  Shows employ continuous live music, with performers rather than stagehands changing the props throughout the event.

Cirque D’Or travels with over 30 performers from around the world, and is a thrill-a- minute spectacle.  The electrifying and mesmerizing Cirque D’Or is one of the most spellbinding shows you will ever see. It has fast become one of the hottest tickets in show business with sold out shows and standing ovations.

Cirque D’Or is perfect for the entire family. Now is your chance to see this amazing show which brings you beautiful costumes, dynamic sound and lighting, and the world’s greatest talent assembled on one stage at the Stanley Theater.

Tickets start at just $20 and can be purchased at The Stanley Theater Box Office, by calling 315-724-4000 or online at http://www.thestanley.org.

About The Stanley Theater

For nearly a century, The Stanley has been bringing the community together with live concerts, Broadway shows, musicals, ballets, movies, graduations and recitals. Today The Stanley operates as a not-for-profit organization run by the Central New York Community Arts Council. Originally built as a movie theatre, The Stanley opened its doors in 1928 with 2,963 seats, a grand entry staircase that resembles the main staircase on the Titanic, a gold leaf interior and terra cotta and tiled mosaic exterior. Designed by renowned architect Thomas Lamb, whose remaining creations include The Stanley Theater, Proctor’s Theatre, Schenectady, N.Y., and The Landmark Theatre, Syracuse, N.Y.

Jerry Kraus I Executive Director I The Stanley I 315.624.2913 I jkraus@TheStanley.org

Nick Abounader I Marketing & Special Events I The Stanley I 315.624.2915 I nabounader@TheStanley.org