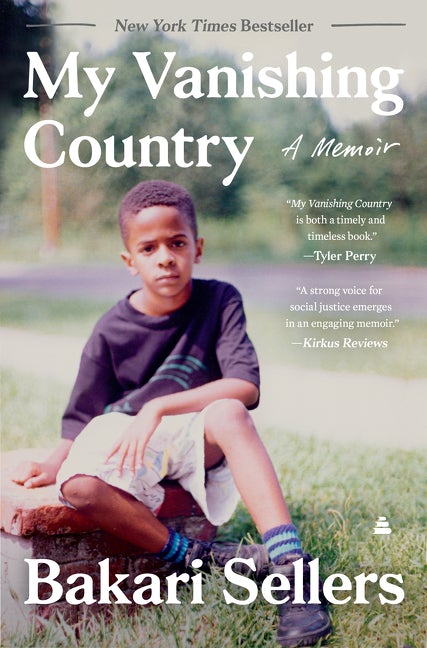 “My Vanishing Country” is a mixed memoir and history of race relations in the United States. From the perspective of author Bakari Sellers, the most important event in his life occurred sixteen years before he was born. At the Orangetown Massacre in February 1968, three black high school and college students were killed by police in a demonstration trying to integrate a bowling alley. Bakari’s father, Cleveland Sellers, was shot by police and falsely accused of inciting a riot, for which he was sentenced to prison over two years later.

Sellers’ education was strongly encouraged by his parents. He entered Morehouse University, the historically Black College in Atlanta, Georgia at the age of 17. In 2006, in an upset election for state representative in South Carolina, he defeated an elderly long-term incumbent becoming, at age 22, the youngest Black State Representative in the nation. He was unsuccessful in a race for statewide Attorney General in 2014. He is a lawyer and became a political commentator for CNN.

The Kent State (Ohio) Massacre of 1970 where four students were shot by police in an anti-Vietnam demonstration is well known to most Americans. The Greensburg Massacre, in contrast, is a mostly forgotten and untaught episode of our history to most white Americans. It joins many other events in our racial history generally omitted in American history courses in public schools.

Sellers includes a brief reference to some episodes, such as Emmet Till, the Black teenager from Chicago, who was brutally killed when visiting Mississippi in 1955 for supposedly flirting with a white woman. This event is often noted as a major spark that ignited the civil rights movement of the 1950s and 1960s.

By the mid-2010s and the election of Barak Obama it was thought by many that we had put much of this dark racial history behind us. But that was not to be. The murders by police of Michael Brown in Ferguson, Missouri and Eric Garner in New York in 2014 led to a greater publicity of police killing Black males at a much higher rate than whites.

The Charleston Massacre, the murder of nine members of the Emmanual African Methodist Church by white supremacist Dylann Roof in 2015 was a more recent tragedy. This was an overtly racial hate crime, with one of the most historic Black churches in the nation being specifically targeted.  Mr. Sellers personally knew some of those killed that day.

Donald Trump was supported by 53% of White women, despite his overt misogyny and racial comments. In contrast, 95% of Black women supported Hillary Clinton. Sellers notes that Black women rarely vote against their self-interest. He also emphasizes that it is often the women of Black churches who are the strength and backbone of the traditional Black churches.

The political importance of this has made many Black churches in the South a near-necessary stop during statewide or national political campaigns. Sellers observes that many active church members are more socially conservative than most Whites realize.

While Sellers does not believe all Trump supporters are racist, the election of Donald Trump led to more overt speech and actions of white supremacists, including the infamous rally in Charlottesville, Virginia in 2017.  This, combined with the increased support by whites and Latinos and Asians of Black Lives Matter (which more recently has seen a decline in support) reveals that we are amidst a reexamination of our racial history.

Growing up in largely Black and poor rural areas of the Carolinas in the 1980s and 1990s, Sellers brings to the fore the still largely hidden rural poverty. Despite his success as a lawyer, State Representative, and political writer and commentator, he has not forgotten his background.

Real issues affecting daily life of poor rural Blacks include the lack of adequate hospitals, health care and transportation, underfunded schools in great need of structural repair, library books and science labs, lack of internet accessibility, and often with poor sewage sanitation or potable water. With the near death of his wife in childbirth, he notes that the successful lifesaving care she received would have likely been unavailable to many in rural areas of the South.

“My Vanishing Country” is an important work reviewing the possibility of success for some, including the author. However, there are still great disparities between a (largely White and comfortable) suburbia and the day-to-day life for Blacks living in poverty in the rural South.

Despite the sometimes confusing and awkward transitions between events that occurred at different times, this memoir presents realities unknown and/or widely misunderstood by most White Americans. It provides a more complete recognition of often repressed and forgotten dark events in our history.

This type of honest reflection is far too rare throughout our history. Perhaps we are experiencing the most important days since the Civil Rights Movement of the 1950s and 1960s with the hopes of  forging a more complete fair and true racial justice. For those beginning that journey, this book is a good place to start.