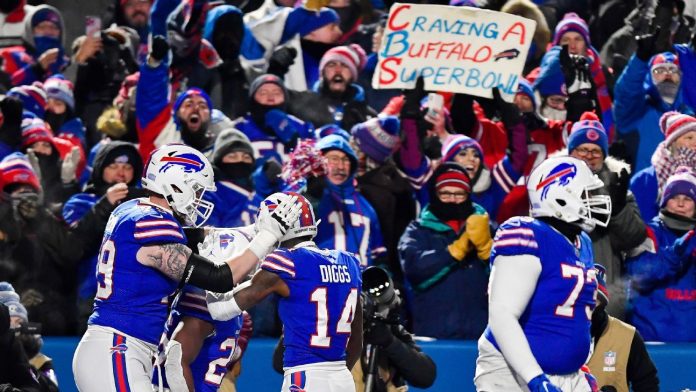 ORCHARD PARK, N.Y. — The Buffalo Bills didn’t just beat the New England Patriots on Saturday. They made a statement to the entire NFL.

The Bills dominated the teams’ third meeting in 41 days, winning 47-17 to move on to the divisional round of the playoffs. Buffalo scored a touchdown on all seven of its possessions outside of a kneel-down at the end of the game, becoming the first team in the Super Bowl era to score a TD on each of its first seven drives of a playoff game, according to the Elias Sports Bureau.

The Bills also became the first team in NFL history to go an entire playoff game without a punt, field goal or turnover.

“It’s not often in coaching you can enjoy the last six minutes of a game and kind of look up in the stands and see the fans enjoying it and at home,” coach Sean McDermott said. “I’m happy for them more than anything. For us as a team this year, it’s one game. That’s a good football team and they’ve been at the top for so long. So, we have a lot of respect for them. We’ve just got to keep moving on.”

With the victory, the Bills have beaten the Patriots twice by double digits in a single season (33-21 in Week 16), becoming the first team to do so since Bill Belichick became head coach.

“We just couldn’t keep up with them. They certainly deserved to win. Well-coached. The team executed well, and we couldn’t do much of anything,” Belichick said after the game.

Dating back to that matchup in Week 16, the Bills’ last 13 drives against the Patriots yielded 11 scores (10 touchdowns and a field goal). During that stretch, the only thing that stopped the Buffalo offense was the clock.

Not only did the offense put up an impressive performance, but the Bills continued to show improvements in areas that have caused issues throughout the season. The running game was effective, and the offensive line that has had a roller-coaster campaign set the tempo.

But the most impressive part of the game for the Bills was the performance of quarterback Josh Allen. Coming into Saturday’s tilt, one of the big questions was whether Allen could step up in freezing temperatures after averaging one of the worst completion percentages in such conditions. He did far more than that with temperatures below 10 degrees throughout the game, putting together one of the best performances of his career.

Allen continued his stellar performance against the Patriots from a few weeks prior, completing 21 of 25 passes (84%) for 308 yards and five touchdowns, in addition to six carries for 66 yards. It is the highest completion rate in a playoff game with 25 or more attempts since Aaron Rodgers‘ 86.1% in the 2010 divisional playoffs. He finished with the fifth-highest passer rating in a postseason game in NFL history (157.6) and more touchdowns than incompletions.

“I think that just kind of speaks for itself,” tight end Dawson Knox said.

Allen became the third player in the Super Bowl era with at least 150 pass yards and 50 rush yards in a single half of a playoff game, per Elias, and he joined Drew Brees (2009) and Russell Wilson (2020) as the only quarterbacks to throw for five touchdowns against a Belichick-coached team.

His performance included two touchdown passes to Knox and one to wide receiver Emmanuel Sanders, whose score was his first TD in the postseason, coming in his 14th career playoff game with his fifth different team.

Allen’s fifth touchdown was a 1-yard throw to reserve offensive lineman Tommy Doyle. All five of the signal-caller’s touchdown throws came in play-action, the most by any player in a regular-season or playoff game since 2006, when ESPN began tracking play-action. Allen has gone four straight games without being sacked.

“It’s fun to watch young players develop. There’s a lot that goes into that,” McDermott said. “Number one is the player, in this case Josh, taking greater ownership of his development and his preparation this week is what led him to the results you guys saw tonight on the field. I think it’s pretty black and white that way.”

Buffalo running back Devin Singletary ran for two touchdowns behind an offensive line that dominated the line of scrimmage throughout the contest. Singletary is the second player in NFL history to score multiple touchdowns in three straight games, at least 40 games into his career, after never having scored two-plus touchdowns in a game once (WR Drew Bennett with the Titans in 2004).

“We always talked about being two-dimensional,” Knox said. “The way [Singletary] has been running the ball has been unbelievable. The movement the line is getting up front. It seems like we could have done anything we wanted to out there.”

The Bills’ defense limited rookie quarterback Mac Jones throughout the game, including forcing two interceptions — one of which was a spectacular play by safety Micah Hyde in the end zone on New England’s first drive of the game that set an early tone. The Patriots were never able to establish the run thanks to Buffalo’s offensive dominance.

The Bills will now head to the divisional round of the playoffs for a second straight season with a perfect record in home playoff games under McDermott.

With a Chiefs win on Sunday night, the Bills would travel to Kansas City, the site of Buffalo’s 2021 AFC Championship Game loss.

With a Pittsburgh Steelers win at Kansas City, however, the Bills would host the Cincinnati Bengals next week.

When you’re going into every game with a win-or-go-home mentality, and that’s really what we’ve had in the last few weeks, just the attention to detail in practice, guys are more attentive,” Allen said. “The urgency is there, and you’re seeing us play better because of it. We’re going to need that same mentality this week.”