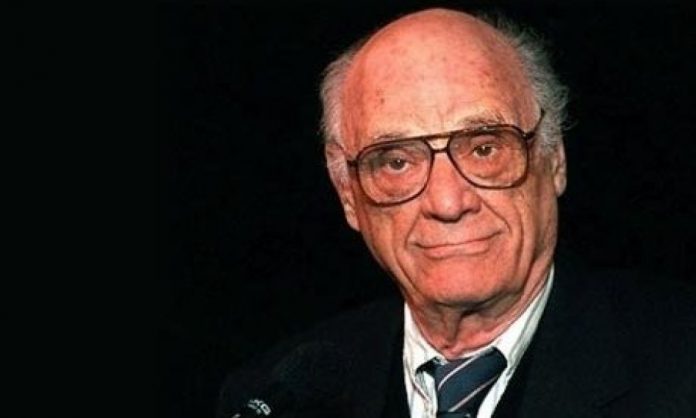 Background
Arthur Miller was an American playwright, essayist, and figure in twentieth—century American theater. His most popular plays are All My Sons (1947), Death of a Salesman (1949), The Crucible (1953), A View From the Bridge (1955), and Devised (1956). He also wrote several screenplays and was most noted for his work on the Misfits (1961). The drama Death of a Salesman has been one of the greatest American plays of the 20th Century along with Long Day’s Journey into Night and a Street Car Named Desire. He was married to Marilyn Monroe in 1956.

Early Life
Arthur Miller was born on October 17, 1915 in Harlem in the New York borough of Manhattan, the second of three children of Augusta (Barnett) and Isidore Miller. His parents were of Polish-Jewish descent. Isidore Miller owned a woman’s clothing manufacturing business employing 400 people. He became a wealthy and respected man in the community. His mother, Augusta, to whom he was closer was an educator and an avid reader of novels. The family lived in Manhattan, owned a summer house in Far Rockaway, Queens, and employed a chauffeur. In the Wall Street crash of 1929, the family lost almost everything and moved to Gravesend, Brooklyn. As a teenager, Miller delivered bread every morning before school to help the family. After graduating in 1932 from Abraham Lincoln High School, he worked at several menial jobs to pay for his college tuition. At the University of Michigan, Miller first majored in Journalism and worked for the student paper, The Michigan Daily. It was during this time that he wrote his first play, No Villain. Miller switched his major to English and won the Avery Hopwood Award for No Villain. The award brought him his first recognition and led him to begin to consider that he could have a career as a playwright. Miller enrolled in a play-writing seminar taught by the influential professor Kenneth Rowe, who instructed him in his early experiences into play-writing. Rowe emphasized how a play is built in order to achieve its intended effect, which Miller called “the dynamics of play construction”. Rowe provided realistic feedback along with much-needed encouragement and became a life-long friend. Miller retained strong ties to his alma mater throughout the rest of his life, establishing, the university’s Arthur Miller Award in 1985, the Arthur Miller Award for Dramatic Writing in 1999, and lending his name to the Arthur Miller Theatre in 2000. In 1937 Miller wrote Honors at Dawn, which also received the Avery Hopwood Award. After his graduation in 1938, he joined The Federal Theater Project, and New Deal Agency established to provide jobs in the theater. He chose the theater project, despite the more beneficial offer to work as a scriptwriter for 20th Century Fox. However, Congress worried about possible communist infiltration, closed the project in 1939. Miller began working in the Brooklyn Navy Yard while continuing to write radio plays, some of which were broadcast on CBS.

His Early Career
In 1940 miller married Mary Slattery. The couple had two children, Jane and Robert (born May 31, 1947). Miller was exempted from military service during World War II, because of a high school football injury to his left knee cap. In 1947 Miller’s play, All My Sons, the writing of which had commenced in 1941, was a success on Broadway, earning him his first reputation as a playwright was established. In 1943 Miller built a small studio in Roxbury, Connecticut. There, in less than a day he wrote Act I of Death of a Salesman. Within six weeks, he completed the rest of the play, one of the classics of World Theater. Death of a Salesman premiered on Broadway on February 10, 1949, at The Morosco Theater, directed by Elia Kazan, and starring Lee J. Cobb as William Loman, Mildred Dunnock as Linda, Arthur Kennedy as Biff, and Cameron Mitchell as Happy. The play was successful and highly acclaimed, winning a Tony Award for Best Author, the New York Drama Circle Critics Award, and the Pulitzer Prize for Drama. It was the first play to win all three of those major awards. The play was performed 742 times. In 1955 a one-act version of Miller’s verse drama A View from the Bridge opened on Broadway in a joint bill with one of Miller’s lesser-known plays, A Memory of Two Mondays. The following year Miller revised A View from the Bridge as a two-act prose drama, which Peter Brook directed in London. A French-Italian co-production, Vu Du Pont, based on the play, was released in 1962.
Marriages and Family

In June, 1956 Miller left his first wife, Mary Slattery, whom he married in 1940, and married film star Marilyn Monroe. They had met in 1951, had a brief affair, and remained in contact since. Monroe had just turned 30 when they married, and having never had a real family of her own, was eager to join the family of her new husband. Monroe began to reconsider her career and the fact that trying to manage it made her feel helpless. She admitted to Miller, “I hate Hollywood. I don’t want it anymore. I want to live quietly in the country and just be there when you need me. I can’t fight for myself any more”. She converted to Judaism to “express her loyalty and get close to both Miller and his parents”. Miller began working on writing the screenplay for The Misfits in 1960, directed by John Huston and starring Monroe. It was during the filming that Miller and Monroe’s relationship hit difficulties, and he later said that the filming was one of the lowest points in his life. Monroe was taking drugs to help her sleep and more drugs to help her wake up. Shortly before the film’s premiere in 1961, Miller and Monroe divorced after five years of marriage.

House of Un-American Activities Committee (HUAC) and The Crucible
In 1952 Elia Kazan appeared before the House of Un-American Activities Committee. Kazan named eight members of the group theater, who in recent years had been fellow members of the Communist party. After speaking with Kazan about his testimony, Miller traveled to Salem, Massachusetts to research the witch trials of 1692. The Crucible, in which Miller likened the situation with the (HUAC) to the witch hunt in Salem in 1692, opened at the Beck Theatre on Broadway on January 22, 1953. Though widely considered only somewhat successful at the time of it release, today The Crucible is Miller’s most frequently produced work throughout the world. It was adapted into an opera by Robert Ward in 1961.

The Crucible and McCarthyism
Later in 1956 the House of Un-American Activities Committee (HUAC) refused to renew Miller’s passport and called him to appear before the committee. His 1953 play, the Tony Award winning, The Crucible, a dramatization of the Salem Witch Trials of 1692, an allegory about McCarthyism, was believed to be one reason why Miller came under the committee’s scrutiny. Miller refused to comply with the committee’s
demands to “out” people who had been active in certain political activities and was thus cited in Contempt of Congress. In 1957 Brooks Atkinson wrote about Miller’s stand against HUAC “He refused to be an informer. He refused to turn his private conscience over to administration by the state. He has accordingly been found in Contempt of Congress. That is the measure of the man who has written these high-minded plays.

Miller Married a Third Time
Miller later married photographer Inge Morath in February, 1962. She had worked as a photographer documenting the production of The Misfits. The first of their two children, Rebecca, was born on September 15, 1962. Their son, Daniel, was born with Down Syndrome on November, 1966; he was institutionalized and excluded from the Miller’s personal life at Arthur’s insistence. The couple remained together until Inge’s death in 2002. Arthur Miller’s son-in-law, actor Day-Lewis, is said to have visited Daniel frequently, and to have persuaded Arthur Miller to reunite with him.

The American Dream
“The American Dream is the largely unacknowledged screen in front of which all American writing plays itself out,” Arthur Miller has said, “whoever is writing in the United States is using The American Dream as an ironical pole of his story. People elsewhere tend to accept to a far greater degree anyway, that the conditions of life are hostile to man’s pretension.” In Miller’s more than thirty plays, which have won him a Pulitzer Prize and multiple Tony awards, he puts in question “death and betrayal and injustice and know we are to account for this little life of ours.” For nearly six decades, Miller has been creating characters that wrestle with powerful conflicts, personal and social responsibility, the repercussions of past actions, and the twin poles of guilt ad hope. In his writing and in the role in public life, Miller articulates his profound political and moral convictions. He once said he thought theater could “change the world”. The fear of being displaced or having our image of what and who we are destroyed is best known to the common man, Miller believes. “It is time that we, who are without kings, took up this bright thread of our history and followed it to the only place it can possibly lead in our time–the heart and spirit of the average man.” Throughout his life and work, Miller has remained socially engaged and has written with conscience, clarity, and compassion. As Chris Keller says to his mother in All My Sons, “once and for all you must know that there’s a universe of people outside and you’re responsible to it”, Miller’s work is infused with his sense of responsibility to humanity and to his audience. “The playwright is noting without his audience,” he writes, “He is one of the audience who happens to know how to speak.”

Honors and Awards
Miller seems secure in his reputation as a major figure in American drama. Arthur Miller is considered one of the greatest American playwrights of the 20th Century. His best known plays include “All My Sons”, “A View from the Bridge”, “The Crucible”, and the Pulitzer Prize winning “Death of a Salesman”. Leaving a body of work that continues to be re-staged internationally and adapted for the screen. He wrote 37 stage plays, 13 radio plays and 8 screen plays. He received numerous honors and awards.
Death

In 2002 Miller’s third wife, Morath died. The famed playwright soon entered into a relationship with 34-year old painter, Agnes Barley. The couple was engaged, however, before they could walk down the aisle, Arthur Miller died on February 10, 2005, which happened to be the 56th anniversary of Death of a Salesman’s Broadway debut. Surrounded by Barley, family, and friends, the legendary playwright died of heart failure, after battling cancer and pneumonia at his home in Roxbury, Connecticut. He was 89 years old.
By Ted Rajchel