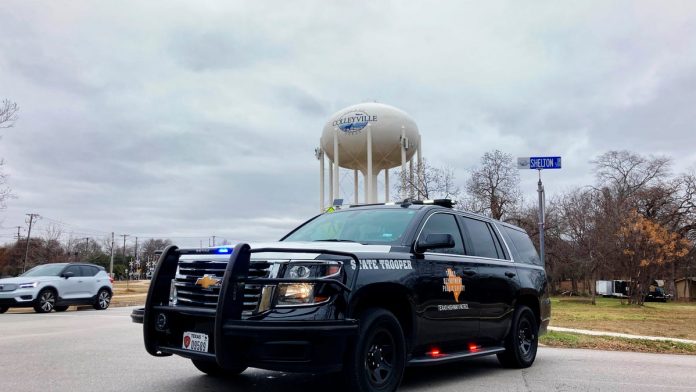 Authorities say a man apparently took hostages Saturday during services at a synagogue near Fort Worth, Texas. (Jan. 15)

Hostages taken Saturday by a man inside a Texas synagogue are safe, officials confirmed.

Saturday night, Texas Gov. Greg Abbott tweeted, “Prayers answered. All hostages are out alive and safe,” after a standoff between a hostage-taker and law enforcement that started during a morning service at Congregation Beth Israel in Colleyville, Texas, and lasted into the night.

A law enforcement official confirmed the hostage-taker was shot. It was not immediately clear if the suspect was shot by police. The hostages were confirmed safe just after 10:30 p.m. Eastern.

FBI Dallas Special Agent in Charge Matthew DeSarno declined to identify the hostage-taker, but said investigators already were involved in a global inquiry, reaching to Great Britain and Israel, to learn more about a possible motive.

DeSarno did not elaborate on how the hostage taker died, but said the shooting incident would be reviewed by authorities. He said the FBI’s elite Hostage Rescue Unit was called to the scene Saturday, flying to the Dallas area as part of a 60-person federal contingent.

The hostage-taker called for the release of Aafia Siddiqui, who was sentenced in 2010 to 86 years in prison for the attempted murder and assault of U.S. nationals and U.S. officers and employees in Afghanistan, a law enforcement official said. Siddiqui is in federal prison in Forth Worth, Texas.

The relationship between the hostage-taker and the prisoner is unclear, said the official who is not authorized to comment publicly.

A rabbi and three others were among the hostages.

“There is more we will learn in the days ahead about the motivations of the hostage taker,” Biden said in the statement. “But let me be clear to anyone who intends to spread hate — we will stand against anti-Semitism and against the rise of extremism in this country.”

Rabbi Charlie Cytron-Walker leads Congregation Beth Israel in Colleyville. Cytron-Walker is the type of rabbi who is “well respected across the faith communities in the area,” according to Rabbi Rick Sarason, who taught Cytron-Walker at Hebrew Union College-Jewish Institute of Religion in Cincinnati from 2002 until 2006.

Sarason said Saturday’s threat at Congregation Beth Israel made him recall other threats made against Jewish houses of worship in recent years.

“Communities of faith — synagogues, churches, mosques — are places of coexistence and understanding and so on and so forth and Rabbi Charlie has always been a prime exemplar of that and I just hope that everybody comes out of this safely,” Sarason told USA TODAY.

For a time the situation was livestreamed on the synagogue’s Facebook page. The livestream cut out around 2:50 p.m. Eastern and was unavailable after it was stopped.

The Federal Bureau of Alcohol, Tobacco, Firearms and Explosives tweeted they were “assisting” Dallas FBI and local authorities.

UPDATE 1/15/22, 1:20 PM The situation at the 6100 block of Pleasant Run Road posted about earlier remains ongoing. We ask that you continue to avoid the area. We will continue to provide updates via social media.

Saturday morning’s service was livestreamed on Facebook prior to the hostage situation. The livestream captured audio of a voice yelling inside the synagogue. Video captured by the livestream didn’t appear to show what was going on off-camera.

“We removed the video from the synagogue’s page, and will also remove content praising or supporting this incident,” a Meta spokesperson said in a statement to USA TODAY. “We are in contact with law enforcement as the situation continues to evolve.”

The Houston chapter of the Council on American-Islamic Relations said they condemned Saturday’s incident.

“This antisemitic attack against a house of worship is unacceptable. We stand in solidarity with the Jewish community, and we pray that law enforcement authorities are able to swiftly free the hostages and bring them to safety,” the group’s statement said.

The Colleyville Police Department tweeted residents in the immediate area were evacuated and people were asked to avoid the area. Colleyville, a community of about 26,000 people, is about 15 miles northeast of Fort Worth and 25 miles northwest of Dallas.

The Anti-Defamation League tweeted Saturday afternoon that it “is aware of the ongoing situation in Colleyville, TX and is engaged with local and federal authorities and the community’s leaders.”

Who is Aafia Siddiqui

According to an indictment filed in Manhattan federal court, Siddiqui, a Pakistani neuroscientist, was detained in 2008 by Afghan authorities, who found a number of items in her possession, including handwritten notes that referred to a “mass casualty attack” and that listed various locations in the United States, including the Empire State Building, the Statue of Liberty, Wall Street, and the Brooklyn Bridge.

Other notes in Siddiqui’s possession referred to the construction of “dirty bombs,” and discussed various ways to attack “enemies,” including by destroying reconnaissance drones, using underwater bombs, and deploying gliders, according to federal prosecutors.

When U.S. officials attempted to interview Siddiqui in Ghazni, Afghanistan, she grabbed a U.S. Army officer’s M-4 rifle and fired it at another U.S. Army officer and other members of the U.S. interview team. During the shooting, Siddiqui exclaimed her intent and desire to kill Americans.

Siddiqui’s lawyer told USA TODAY on Saturday that her client was not involved in any way with the hostage situation, and that her only brother, an architect who lives in Houston, has confirmed that he has nothing to do with it either.

Elbially said she had not been given the name of the suspect or other details about him by authorities. Elbially said she heard about news reports of the incident where the hostage-taker referred to Siddiqui as his “sister.”

“I have no idea who this individual is or how they even came up with linking him to her family directly like that,” Elbially said. “I knew, obviously and immediately, when they initially said that it was her brother that it was completely false.”

Elbially, who has represented Siddiqui for the past year, added: “What I can say is that we really pray that nobody is harmed or injured and that the police are able to handle the situation and take him into custody.”