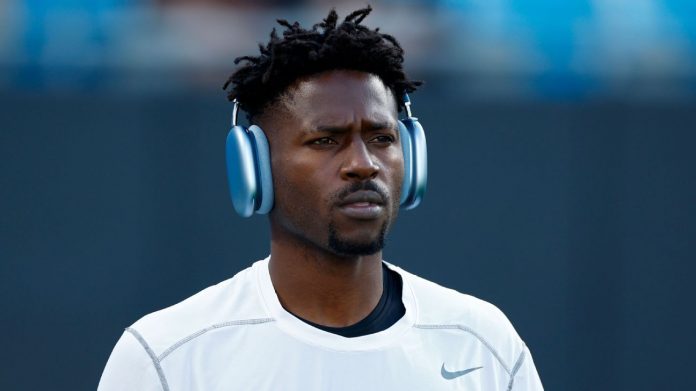 TAMPA, Fla. — Former Tampa Bay Buccaneers wide receiver Antonio Brown and his attorney, Sean Burstyn, said Tuesday they intend to pursue legal action against the Bucs for releasing Brown after he said he was too injured to continue playing against the New York Jets earlier this month and claimed coach Bruce Arians ignored his pleas to not reenter the game.

Appearing on HBO’s “Real Sports with Bryant Gumbel,” Burstyn said they not only will pursue money for Brown’s ankle surgery and money they feel he is owed by the NFL’s collective bargaining agreement, but they also are looking into a possible civil lawsuit in the form of defamation for the Bucs claiming he had a spontaneous mental health episode.

“Tony [Brown] was defamed by this spin that he had a mental health episode that makes him someone who’s not reliable to do a good job on the field,” Burstyn said. “So we’re pursuing internally all of our rights under the CBA and considering them and maybe stepping outside of the CBA.

“All of our options are on the table. We’re going to hold to account the Tampa Bay Buccaneers, Bruce Arians, the general manager to the extent anyone who’s responsible for this spin that Antonio isn’t reliable to do a good job playing football because he doesn’t have the mental fortitude to do it. They’ll be held to account.”

Brown and his attorney would not provide a monetary figure on how much they’re seeking.

“A whole lot of money. A whole lot,” Brown said, adding that he was shown disrespect with the team questioning his mental health.

“So to drag people along and play on people’s mental health, you know, is so unfair and unfortunate,” he said.

Burstyn said he has evidence that general manager Jason Licht texted him after the game. He said he had spoken with Bruce Arians and that Arians told him Brown did say his ankle was injured, which conflicts with Arians’ version of events; Arians had said he was unaware that Brown felt he was too hurt to continue.

When asked if he knew Brown was hurt, Arians said, “I don’t know that he was.”

Brown disputed Arians’ claim that he was upset about his lack of targets at halftime and needed to be calmed down by teammates.

“I’m not worried about the ball,” Brown said. “Tom Brady is my guy. He’s the reason I’m on Tampa Bay, so I know I’m gonna get the ball.”

Gumbel attempted to interject, but Brown continued: “I’m gonna get the ball. Now. I’m Antonio Brown. You know, I’m a receiver. I get the ball. I got a million dollars on the line that I had to reach, sir.”

Gumbel said, “Well, that’s what I’m asking you. Could you have potentially earned bonus money if you had been targeted more and had more catches and more yardage in the Jets game?”

Burstyn stepped in, “Under the contract? Yes. If he was physically able to continue playing.”

When Arians was told that Brown denied he was upset about targets, Arians said, “The players know the truth.”

Brown claimed that the Bucs offered him $200,000 to sit on the sideline and commit himself to mental health treatment, which Brown refused to do.

“These guys at the Tampa Bay Bucs tried to make an agreement with me to give me $200,000 to go to the crazy house so these guys could look like they know what they were talking about,” Brown said.

Burstyn said Licht told him in writing twice, “Do not spin this any other way.”

When asked if he believed he needed mental help of any kind, Brown said, “I have mental wealth, man. I know a lot of people may not understand me, know how I look at things or don’t know how I react [to] emotional things, but it’s not for them to understand me. I’ve got a beautiful family, kids and people all across the world that look up to me, and it’s no reason I’m in this position at this point.”

Arians did not specifically use the words “mental health” in discussing Brown’s incident. When Arians was asked about Brown leaving the field, he said, “Yeah, it was very hard. I wish him well. I hope, if he needs help, [that he] gets some. It’s very hard because I do care about him.”

Brown and his attorney said he was injected with the painkiller Toradol right before the Bucs’ Week 16 game at the Carolina Panthers and before the Jets game in Week 17 and that he was regularly injected with it. While Toradol is still allowed in the league, the NFL did send out a memo in June urging teams to limit use of the painkiller by players due to the risk of causing major bleeding.

The memo stated, “Toradol should not be used prior to, during, or after NFL games or practices as a means of reducing anticipated pain.” The memo also stated that Toradol should be used “following an acute, game-related injury where visceral or central nervous system bleeding is not expected and where other oral or intranasal pain medications are inadequate or not tolerated.”