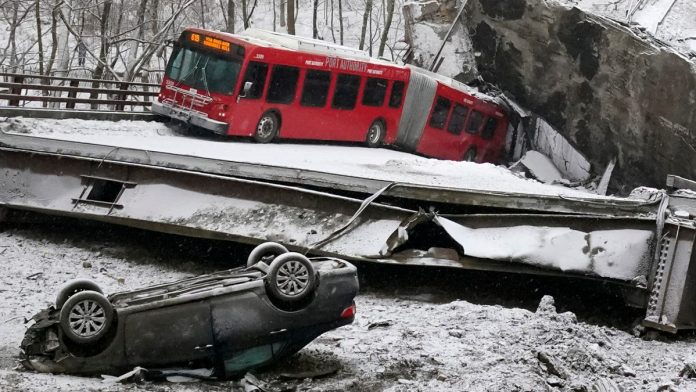 The collapse occurred on the same day that President Biden was expected to travel to the area to discuss his infrastructure plan.

Ten people were injured and three were taken to a hospital after a snow-covered bridge in Pittsburgh collapsed Friday morning, Pittsburgh fire officials said.

The three people taken to the hospital have non-life-threatening injuries, Pittsburgh Fire Chief Darryl Jones told reporters Friday. The public safety department said five vehicles and one bus were on the bridge when it collapsed.

The U.S. Army Reserve is being deployed to ensure no victims are trapped under the collapsed bridge, the public safety department said.

Pittsburgh Port Authority confirmed to USA TODAY that a 60-foot city bus was on the bridge during the collapse. The bus driver and two passengers escaped without injury.

Rescuers used ropes to rappel at least 100 to 150 feet to the fallen bridge, and others formed a human chain to help rescue occupants of the bus, Jones said.

Jones said a “massive gas leak” caused by the collapse is now “under control” and gas services have been restored. A gas line was cut after the public safety department reported “a strong smell of natural gas in the area.”

Officials have urged residents to avoid the area, and several area families were evacuated but have since returned to their homes surrounding the bridge, Jones said.

Another image from local news station KDKA-TV showed at least four vehicles in the chasm left by the fallen bridge as another vehicle dangled near the edge.

A September 2019 inspection of the city-owned bridged showed it to be in poor condition, according to the U.S. Department of Transportation’s National Bridge Inventory. Sam Wasserman, a spokesperson for Pittsburgh Mayor Ed Gainey, told USA TODAY the most recent inspection of the bridge was completed in September 2021.

USA TODAY ANALYSIS: More than 45,000 of America’s bridges are in ‘poor’ condition

“I hope it’s a wake-up call to the nation that we need to make these infrastructure investments,” Pennsylvania Lt. Gov. John Fetterman said at the site of the collapse.

Police, firefighters and emergency medical service teams responded to the collapse, and the Red Cross has been contacted to help victims, safety officials said. Pennsylvania Gov. Tom Wolf tweeted he is monitoring the situation.

Mayor Ed Gainey tweeted he was thankful there were no fatalities or critical injuries and thanked safety departments for their “quick response.”

The collapse came hours before President Joe Biden was set to visit the city to discuss a $1 trillion infrastructure bill that includes bridge maintenance. The White House said in a statement Biden still plans to visit Pittsburgh.

“Our team is in touch with state and local officials on the ground as they continue to gather information about the cause of the collapse,” the statement said. “The President is grateful to the first responders who rushed to assist the drivers who were on the bridge at the time.”