How former NBA star Nate Robinson ended up boxing on 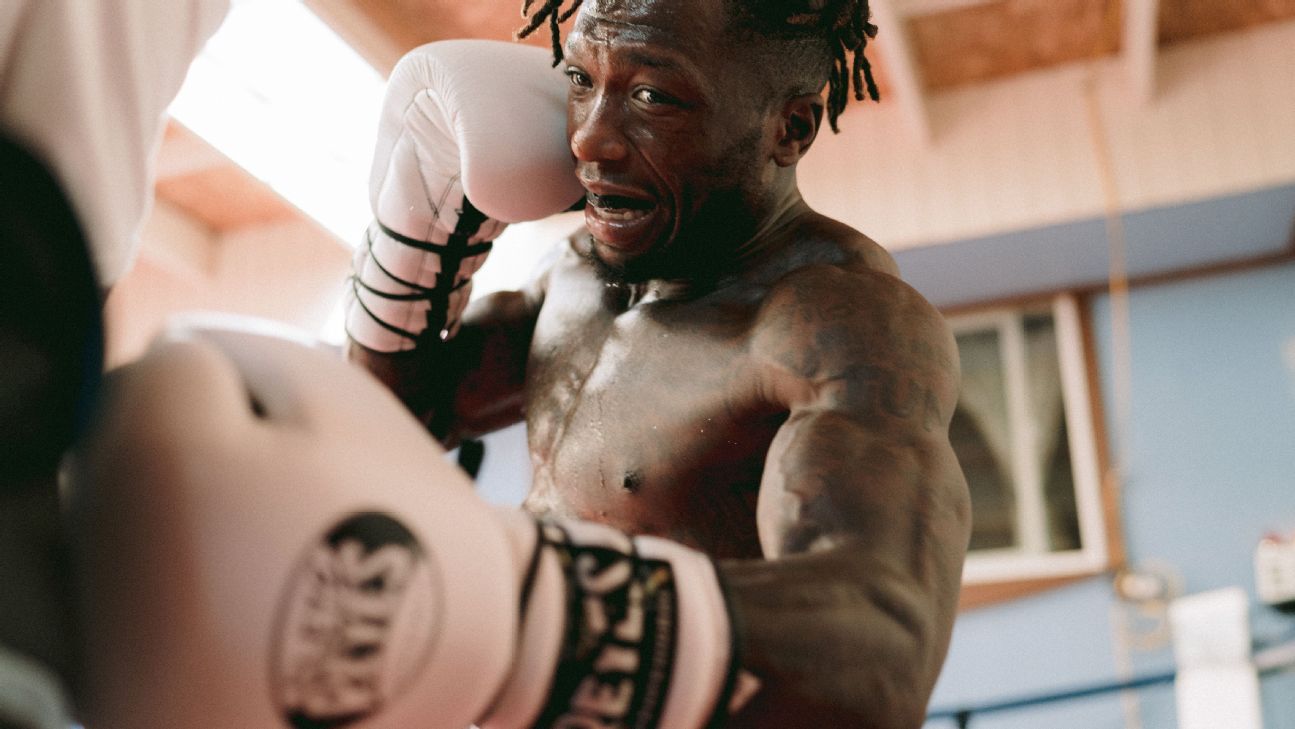 Nate Robinson‘s alarm goes off before the sun rises. The NBA’s lone three-time Slam Dunk Contest champion rolls out of bed — no snooze button allowed — to get ready to train. He isn’t currently focused on returning to the basketball court but is instead pursuing a new endeavor that has him at the gym six days a week, twice a day.

At age 36, with no prior professional or amateur experience, Robinson is getting ready for his first boxing match. “It’s brutal. Waking up early, running six or seven miles, it’s something I’ve never done in my life, and I’m doing it at 36, so it’s definitely making me feel young and energetic,” Robinson told ESPN. “It’s really tuning me in to another part of myself that I never knew I had.

“But I just want people to respect me as a person, as an athlete and as a boxer because I’m going through it,” he continued. “I’m not taking it easy and going through the motions. What they’ll see Nov. 28 is a Nate Robinson that really put in work to really get to this point, and I hope I surprise a lot of people, because a lot of people think I’m gonna lose.”

Robinson will enter the ring that night for a six-round bout against famed YouTuber Jake Paul (1-0, 1 KO) on the Mike Tyson-Roy Jones Jr. undercard. Robinson’s camp started at the end of August and is expected to wrap almost a week and a half before the fight date. His team includes strength and conditioning coach Chris Denina — who typically works with Robinson in the mornings — and boxing trainer Francisco “Paco” Reyes of Tenochtitlan Boxing Club in Renton, Washington. Reyes oversees the evening sessions.

“We’re really pushing him and molding him to be more of an endurance athlete. And Nate’s a very explosive athlete,” Denina said. “There’s certain things, which are nice, that I don’t really need to work on. It’s mainly just his conditioning and making him use his body in ways that he’s never really done on the basketball court.”

When the idea of training Robinson was presented to Reyes, his initial reaction wasn’t positive.

“Hell, no,” Reyes said, not wanting his gym to become some sideshow for an ex-NBA player whom he didn’t know much about. Eventually, he was persuaded.

“I realized that he was serious about it when he came back after that first sparring session,” Reyes said. “Not a lot of people come back after the first sparring session, but he came back, he wanted more, he wanted to keep going, and that really got my interest. A lot of people will come and spar and are like, ‘Oh, no, I’m good,’ but not Nate. He has the heart.”

At 5-foot-9 and less than 200 pounds throughout his NBA career, Robinson developed a reputation for toughness and athleticism. In high school, he excelled in track and football, as well as basketball. At the University of Washington, he starred on the gridiron and hardwood before deciding to focus solely on basketball. But boxing is something completely different, especially experiencing it for the first time at his age.

“It’s been a challenge learning how to breathe and fight while you’re tired,” Robinson said. “That’s been the fun part. Like Mike Tyson said, ‘Everybody has a plan until you get punched in the mouth,’ and then you have to figure it out. I never understood that until I actually got in the ring for the first time with sparring, and I knew exactly what he meant.”

Nate Robinson has been training at the Tenochtitlan Boxing Club and has received calls from Floyd Mayweather throughout this process. Sean Flanigan/ A Fist Full of Bolts

Since his last stretch in the NBA in 2015-16, on a 10-day contract with the New Orleans Pelicans, Robinson played basketball in the BIG3, the NBA Development League (now the G League), the Israeli Basketball Premier League and the Liga Profesional de Baloncesto in Venezuela. He also signed to play in Lebanon in 2018 before an injury scuttled those plans.

Off the court, Robinson appeared in the 2018 film “Uncle Drew” with Kyrie Irving, tried out with the Seattle Seahawks in 2016 and collaborated with former NBA player Carlos Boozer to launch the HOLDAT clothing brand.

These other pursuits have kept him busy, but the idea of entering the ring started over a year ago, when Robinson’s manager, Napoleon “Polo” Kerber, met Paul at an event. As he continued his search for new challenges post-basketball, Robinson agreed to fight Paul despite no professional experience.

Top Rank Boxing is on ESPN and ESPN+. Subscribe to ESPN+ to get exclusive boxing events, weigh-ins and more.

What Robinson does carry into his fight is a longtime appreciation for the sport.

“I’ve been a fan of boxing my whole life. Me and my brother, we used to slap box and use boxing gloves in the backyard with my dad. So, it’s nothing new, it’s just real business now,” Robinson said. “I’ve played in front of thousands of people my whole life hooping, so just being able to step into a realm that I’ve never been in before is challenging for me, but it’s also fun to try to see how far I really can go with this.”

Robinson’s father, Jacque Robinson, was a legendary athlete at Washington; he is in the Rose Bowl Hall of Fame after being named MVP of the game in 1982 as a freshman. He also enjoyed a brief NFL career with the Philadelphia Eagles in 1987.

Jacque introduced his son to boxing through Muhammad Ali and — a bit coincidentally, since he’s fighting on his undercard — Tyson. Growing up, if you stayed at Robinson’s home for a sleepover or just for fun, somehow the gloves would get pulled out to teach life lessons. Nate’s brother, Anthony “Chicken” Stewart — who was a running back at Central Washington University — wasn’t afraid to get busy, either.

“We had a heavy bag in our backyard. We had weights and we had boxing gloves and my dad was like, ‘At least y’all are going to know how to fight, and y’all will know how to take care of each other,'” Robinson recalled. “So my dad was like, ‘If you’ve got some homies that are coming around you, and guys are being around y’all and something happens, and they run or they’re not trying to fight or protect the crew, then y’all don’t need to hang around them.'”

Robinson got into a handful of fights in middle school in high school, but that was the extent to which he used his backyard boxing experiences. Until now. These days he’s receiving advice from Floyd Mayweather Jr. via FaceTime, and although he couldn’t make it, Robinson was invited to train with welterweight champion Terence Crawford.

Despite the focus on boxing, Nate Robinson still hopes for an opportunity to return to the NBA. FREDERIC J. BROWN/AFP/Getty Images

Robinson spent 11 seasons in the NBA and hasn’t ruled out a return if there’s an opportunity.

“I do. If it’s possible,” Robinson said of playing again. “I just want the chance to show a team, even at 36, I could still play and still ball out, still be a good spark off the bench. But times have changed, the NBA has changed so much. Naw, I will never say I’m retired. They retired me. I didn’t retire.

“Of course I would love to hoop,” Robinson added. “I would love to be able to finish my career playing the game I love and showing them that I really could still ball and be effective. Even if it’s five minutes, 10 minutes, just being there helping out with whatever they need. Whatever they need me to do, I’m there. That’s what I’m here for.”

Whether or not he plays another minute in the NBA, Robinson’s connections to the league are deep. Fellow Washington native Zach LaVine of the Chicago Bulls has gotten to know Robinson over the years and has watched the transformation of Robinson’s body into a boxer. He will be tuned in to the bout.

Monday through Friday, host Pablo Torre brings you an inside look at the most interesting stories at ESPN, as told by the top reporters and insiders on the planet. Listen

“He is a supreme athlete. Realistically, he was one of UW’s best cornerbacks and probably could’ve been an NFL cornerback. Obviously, you know how good he was in the NBA, and right now he’s in the best shape of his life. The dude is built like a fire hydrant,” LaVine said. “I mean, like, he is stacked, so whatever he puts his mind to, I know he can get it done.

“Boxing is a whole different world, so he’s been training for the last eight or nine months,” LaVine continued. “He’s transformed his body into looking like a real boxer, too, so I don’t think anybody’s gonna be stepping to him in Seattle anytime soon.”

Outperforming expectations has become Robinson’s calling card, and that boils down to his determination and effort in everything he pursues.

“People have been putting me behind the eight ball my whole life, but it’s something that I’m used to. I’ve been the underdog forever, and it’s just going to be sweet to know that so many people didn’t believe in me and I get a chance to show them again.”

Facebook
Twitter
Previous articleHow Removing Unwanted Rubbish From The Home Can Make You
Next articleVoices of Polonia: Jadwiga of Poland, Queen and Saint