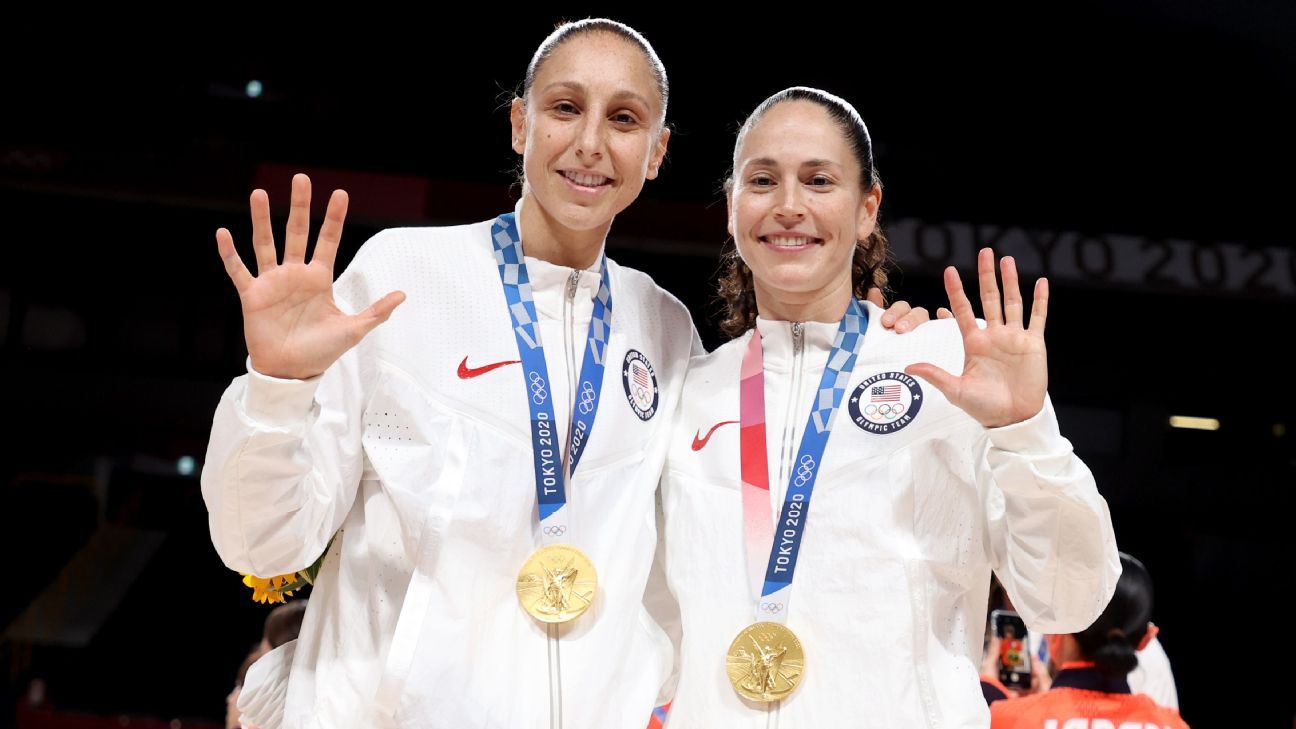 As the first basketball players to win five Olympic gold medals — leading the U.S. women to a seventh consecutive gold in the process on a historic final day at the Tokyo Games — Sue Bird and Diana Taurasi also solidified the title given to them by the coach who brought the duo together two decades ago.

“They are two of the greatest teammates in the history of sports,” UConn’s Geno Auriemma said. “Even if you only used UConn, or only the Olympics, or only Europe. Throw in all three, and no one even comes close.

“If this is indeed their last Olympics together, winning a gold medal just got a lot harder [for U.S. women’s basketball].”

“If” might seem an unnecessary qualifier considering Bird turns 41 in October and Taurasi is 39. While Bird has said this will be her last Olympics, the backcourt duo has been at the top of the sport for so long, it’s hard to imagine Team USA without them.

“We always say we’re lucky we get to do this together,” Taurasi said. “There’s this confidence and this trust factor you have.”

Perhaps they will have one last go-round next year at the FIBA Women’s World Cup. It’s the kind of thing Bird and Taurasi would consider, because they’ve taken their national team commitment as a solemn oath, as dear to them as anything in their epic careers. They played together two seasons at UConn and several years overseas in Russia. But their most iconic pairing has been wearing the red, white and blue of the senior national team through five Olympics and four World Cups.

Including Saturday’s 90-75 win over Japan, Bird has 10 medals between the Olympics and World Cup, more than any men’s or women’s basketball player. All are gold except the 2006 World Cup bronze. Taurasi is one medal behind her. Bird’s first came in the 2002 World Cup when she was a Seattle Storm rookie, and Taurasi was a UConn junior.

“They’ve done so much for USA Basketball that the rest of us players are just continuing to try and return the favor and make sure that they realize how much we appreciate them,” said U.S. forward Breanna Stewart, who is also Bird’s teammate with the Storm.

All the news from the Summer Games in Tokyo on ESPN: Read more »

A huge amount of talent — including four-time Olympic gold medalists Lisa Leslie, Teresa Edwards (she also won an Olympic bronze) and current team member Sylvia Fowles — paved the way and helped the United States win nine of the 11 Olympic women’s tournaments they’ve entered, and their run of winning seven in a row matches the longest gold-medal streak any country has had in any Olympic team sport. But no players have contributed more to the U.S. gold haul than Bird and Taurasi: 2004, 2008, 2012, 2016, 2020.

“They’re a big part of the glue to the whole system,” Leslie said. “Once, they were the babies coming in. They were open to listening, respectful to the older players. That’s the culture.

Sue Bird and Diana Taurasi have been teammates — and best friends — in college, Russia and the Olympics. Terrence Vaccaro /NBAE/Getty Images

But Bird and Taurasi, who will one day both be in the Naismith Memorial Basketball Hall of Fame, are different. What are the odds of two players from opposite coasts, born 20 months apart, ending up at the same college, then going on to be both good enough and healthy enough to stay at the top of their sport through five Olympic cycles? Both also complement each other so well: Taurasi is the WNBA’s all-time scoring leader who is also an expert passer, while Bird is the league’s career assist leader also known for her dagger-like shooting.

It has been a fantastic confluence of athletic talent, ambition, personality and commitment. One of the closest comparisons in basketball is Bill Russell and KC Jones, who led the University of San Francisco to two NCAA titles, won gold at the 1956 Melbourne Olympics with the United States and then won eight NBA titles together with the Boston Celtics.

There’s also Edwards and Katrina McClain, Georgia teammates who reached the 1985 NCAA championship game and then played in three Olympics together.

Bird and Taurasi came together at UConn in the fall of 2000: Bird a junior from Long Island who had won a national championship with the Huskies earlier that year and Taurasi the highly anticipated recruit from California. They lost in the 2001 Final Four, but nothing could stop them the next season. They defeated Tennessee so thoroughly in the 2002 national semifinals that Lady Vols coach Pat Summitt went to the UConn locker room to tell them they were one of the best teams she had ever seen.

Bird was the No. 1 pick in the 2002 WNBA draft and the understudy at point guard to current U.S. coach Dawn Staley in the FIBA World Cup later that year. Taurasi won two more NCAA titles and was a No. 1 draft pick herself, by Phoenix, and then joined Bird and Staley on the 2004 Olympic team. Their only loss in a major competition with USA Basketball came to Russia in the 2006 World Cup semifinals.

Each has been the longtime face of her WNBA franchise. Bird, in her 18th WNBA season in Seattle, has won four WNBA titles, while Taurasi, in her 17th season in Phoenix, has three. Bird missed two seasons dealing with knee injuries; Taurasi sat out one to rest after years of non-stop play between the WNBA and overseas.

The overseas part of their careers was far from the limelight in frigid Russian winters. They lamented missed milestones with family and friends back home, but it paid so well they committed to doing it. They played on three different Russian teams together and won five EuroLeague championships.

Bird said the few quarrels they’ve had didn’t come when they were playing at UConn or with USA Basketball.

“It was when we were in Russia,” she said. “At some point, you get sick of people, or an argument comes up that goes a little too far. Maybe a little too much wine. You take your space and then you wake up the next day and play. But we’ve had to apologize to each other before.”

Taurasi said she could count on one hand the times they truly have been mad at each other.

“And it’s probably over the dumbest s— ever,” she said. “We’re able to have different opinions but always come to an understanding of working through things. We take that attitude and put it into all the teams we’ve been on.”

Auriemma coached Bird and Taurasi in two Olympics and two World Cups, and said he is particularly proud of their longevity and the mental toughness it takes to keep pushing yourself year after year.

Staley loves their maturity and dependability: “They’ve played everywhere. They’ve been through everything. There is nothing they haven’t seen.

“They want to play perfectly. They still want to be coached, and that’s an incredible thing at this level, when their intellect is off the charts.”

Bird said wearing the Team USA jersey still matters just as much to her, no matter how big her medal collection. At 15, she went with AAU teammates to see the national team playing an exhibition in 1995 while preparing for the Atlanta Olympics. Watching U.S. point guard Jennifer Azzi, in particular, inspired Bird, who called it her first “see it, be it” moment.

“I was like, ‘Here’s this player who is kind of the same size as me, same build, and she’s able to do this,'” Bird said. “And remember, there was no WNBA yet. So for us, in that generation, you were really looking to the Olympics as the ultimate goal.”

Bird couldn’t have known that 26 years later, she would be celebrating a fifth Olympic gold medal with one of her best friends. Both Bird and Taurasi have been “see it, be it” inspirations for countless kids.

Taurasi jokes that she deals with the weight of history, of her place in the game and all that she and Bird have shared by “Not doing a lot of thinking. I’m very narrow-focused on the things I’ve got to get done.”

What they’ve gotten done has been remarkable.

So much has changed in the world and in women’s basketball over the last two decades. But the bond between Bird and Taurasi has been unchanging, bringing a sense of confidence and purpose to the national team that all who have played with them have appreciated.

“There’s certain people in life you just get along with really well, and you have so many shared experiences that you can relate a little more,” Taurasi said of her friendship with Bird. “That’s what the last 20 years have been like.”

Facebook
Twitter
Previous article
Assange’s Extradition: Incarceration in the Time of Covid-19 Threatens His
Next article
Nationals, Orioles, Pirates and Rays are not happy with these