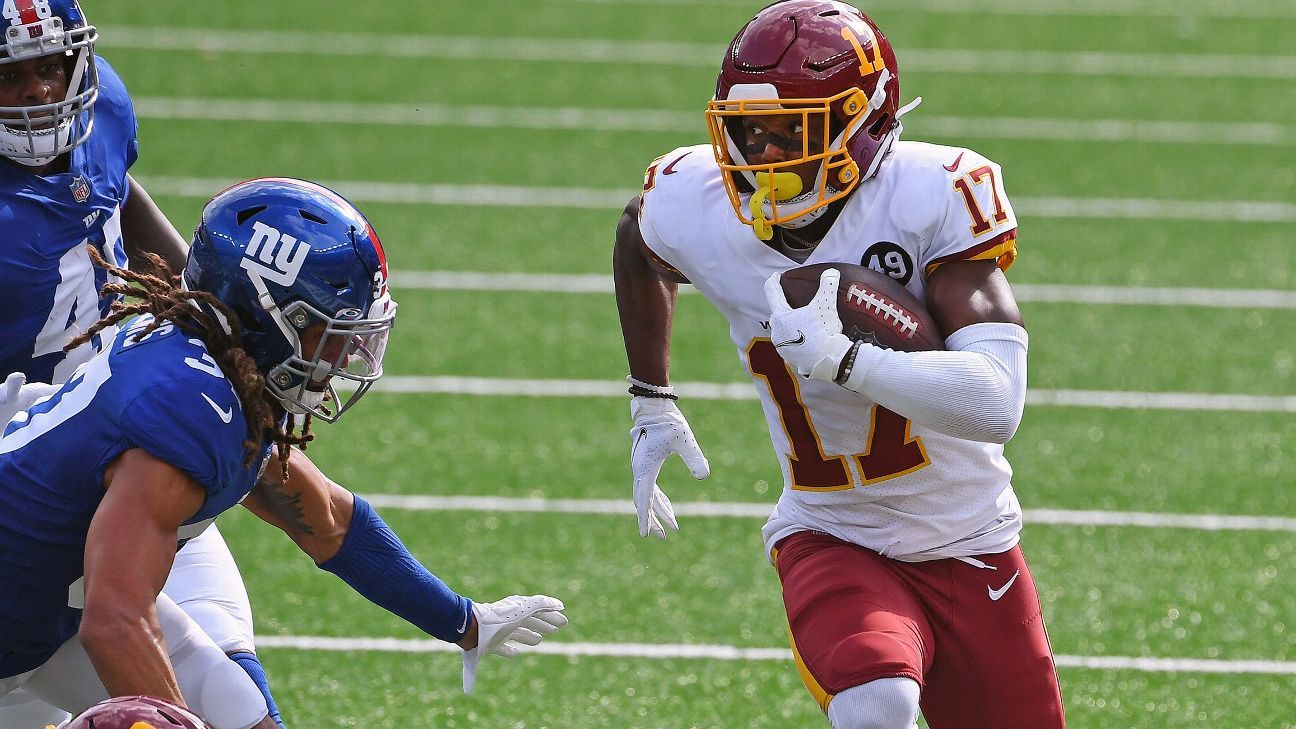 It’s remarkable to think that we’re nearly halfway through the fantasy football regular season, isn’t it?

That’s how swiftly the season progresses, and while we’re on the topic, there’s no better time to remind you how critical it is to address improvements to your team before everyone is making a last-ditch push at the playoffs. That’s right, folks, it’s prime time for trading season in fantasy football leagues.

In order to get you started on the right foot in your talks, listed below are four players you should consider acquiring in deals right now, while their value is perceived to be lower than the truth, as well as four you should be trading away wherever possible.

Joe Burrow, QB, Cincinnati Bengals: Forgive him for his struggles the past two weeks — 21.0 fantasy points combined — as the rookie’s matchups (@BAL, @IND) were easily his two toughest on his entire 2020 schedule. Burrow has nevertheless shown more poise than expected as a rookie, and he has a 13.9% off-target rate with his passes (the league average is 16.7%), which looks even better if you remember he leads the league in pass attempts. His mobility continues to keep his weekly statistical floor high enough to warrant a weekly QB2 start in two-quarterback or superflex leagues, but as he continues to gain experience and reaches the softer portion of his schedule, he might begin making cases for back-end QB1 rankings. This is the kind of quarterback I want as my No. 2, in every league.

Noah Fant, TE, Denver Broncos: I’ve written often that it’s difficult to trade for a player who’s injured or coming off an injury, in part because your trade counterpart might suspect you have some sort of inside knowledge, and in part because you’re absorbing a heightened level of setback risk. In Fant’s case, I’d push aggressively for such a move. At the time he got hurt, he was tied for the team lead with a 19% target share (26-of-135), had 2-of-7 team end zone targets and was showing good chemistry with now-healthy quarterback Drew Lock, with whom Fant has averaged 10.0 PPR fantasy points per game compared to 6.9 before Lock assumed the job last season in Week 13. The Broncos’ schedule also favors Fant, with their bye week in the rearview and attractive matchups against the Atlanta Falcons (Week 9), New Orleans Saints (Week 12) and Buffalo Bills (Week 15) upcoming.

Kareem Hunt, RB, Cleveland Browns: He’s coming off a pair of disappointing performances as the full-time fill-in for Nick Chubb, totaling 26.0 PPR fantasy points with a worst-in-the-league minus-0.2 yards after contact per carry, and Chubb’s approaching return might cause Hunt’s managers to panic about a shrinking role. That makes it an ideal time to buy. Hunt was performing as an RB1 even with Chubb on the field, playing only nine fewer snaps in their four games together while scoring 9.5 more PPR fantasy points, and as the Browns have struggled to maintain leads all year, Hunt has the advantage of holding the lead in the passing-down pecking order. Hunt also has a lot of extremely favorable matchups in his near future, all at times when Chubb is no guarantee to play, including those against the Las Vegas Raiders (Week 8), Houston Texans (Week 10) and Jacksonville Jaguars (Week 12).

Terry McLaurin, WR, Washington Football Team: You’ll have to pay to acquire him, certainly at a minimum valuation of a midrange WR2, but if that’s the asking price, count me all-in. McLaurin’s season has been exceptional, if you make the requisite adjustments for the miserable quarterbacking in Washington for the first four weeks. His 26% target share is sixth best in the league, and he has generated the most yards after the catch of any wide receiver (271), which speaks to his playmaking ability. McLaurin also has almost all of his most favorable matchups ahead of him: Two against the Dallas Cowboys (Weeks 7 and 12), one against the Cincinnati Bengals (Week 11) and one against the Seattle Seahawks (Week 15).

Mike Evans, WR, Tampa Bay Buccaneers: The Buccaneers’ receivers are finally starting to get healthy, and equally importantly, tight end Rob Gronkowski looked like his New England Patriots self in Week 6. That’s great news for quarterback Tom Brady, but it’s not as good for Evans, who has a history of hot-and-cold performances. In his 96 career games, Evans has as many games with fewer than three PPR fantasy points as he does with at least 35 (five apiece). Brady’s lack of a vertical passing game puts a strain on Evans’ upside, and frankly, it’s a surprise Evans has as many as six receiving touchdowns, which is what has buoyed his fantasy value to date. With matchups upcoming against the New Orleans Saints (Week 9), Carolina Panthers (Week 10) and Los Angeles Rams (Week 11), as well as an extremely inopportune bye in Week 13 — usually fantasy’s regular-season finale — he’s a prime name to peddle.

Todd Gurley II, RB, Atlanta Falcons: Everyone knows about the injury risk, and most everyone is going to make the sell-high pitch. Still, there’s an angle here: Talk up Gurley’s next two matchups, against the Detroit Lions and Carolina Panthers, as reason for your counterpart to buy in, or if you can’t, hope they forget those schedule advantages when you try to cash in following those weeks. Gurley has had a relatively productive season thus far as the RB14 through six weeks thanks to 10 goal-to-go carries and five rushing touchdowns, but he’s also averaging 16.5 carries per game, down from the 18.0 he averaged from 2015 to ’18, when he built up a lot of name value. It doesn’t help that the Falcons’ defense hasn’t been doing the offense any favors, either, drawing the team into frequent shootouts.

Aaron Rodgers, QB, Green Bay Packers: He’s the lone repeat from my last edition in September, and while things have changed after he endured a Week 6 stinker, that game represents the caution his managers should have going forward. The Packers have one of the worst remaining schedules for quarterbacks, with games upcoming against the Indianapolis Colts (Week 11), Chicago Bears (Weeks 12 and 17) and Carolina Panthers (Week 15), so that’s probably not the last time that Rodgers is going to disappoint you, considering those defenses will probably have an easier time keeping him in check with the limited depth in the Packers’ receiving corps. If you need a sales pitch for Rodgers, try this out: He’s still QB10 in terms of fantasy points per game (21.4), his 8.9 yard average depth of target is his highest since 2011 and his 14.0% off-target rate is the best of his entire career.

Jonnu Smith, TE, Tennessee Titans: To be clear, I like the guy. The Delanie Walker comparisons are apt, as Smith has similar size and therefore fits the mold as a big goal-line target for Ryan Tannehill. The problem, though, is Smith has inflated his perceived value behind five receiving touchdowns, four of which came in two games, and despite placing TE5 in terms of PPR fantasy points, he’s a clear talent level beneath the four names we typically rank at the front of the position. Smith is also nursing an ankle injury, plus faces a brutal schedule for tight ends the rest of the way, including tough matchups against the Pittsburgh Steelers (Week 7), Indianapolis Colts (Weeks 10 and 12) and Baltimore Ravens (Week 11). Unless he’s the one tight end you’ve got after going the cheap route on draft day, he’s someone to peddle.

These are players you might be considering dealing, but for whom you might want to have second thoughts upon closer inspection.

Ronald Jones II, RB, Tampa Bay Buccaneers: One would think that on a team with the high-profile names in the passing game the Buccaneers have, not to mention the number of other name-brand alternatives in their backfield, that the perfect time to shop Jones would be coming off a 26.1 PPR fantasy-point performance and three consecutive 100-yard rushing games. I’m not so sure. Jones might well deserve this backfield all to himself, as a big, tough back who currently ranks fifth in the league in yards after contact per carry (2.1), and I wonder whether he’s really going to cede his recent boost in volume to Leonard Fournette once the latter is healthy. At the very least, don’t get tricked into selling low — think: flex tier — on Jones.

D’Andre Swift, RB, Detroit Lions: I wrote a bit more extensively about his Week 6 outburst here, and while it included a caution that the Lions seem committed to their committee for the long haul, I don’t think that’s necessarily as damning to Swift’s rest-of-season value as most do. The team showed a lot of confidence in him by giving him extensive time at the goal line, and Swift’s overall rushing workload has been steadily inching up on Adrian Peterson’s. There’s an RB2 valuation point possible here, and I wouldn’t cash in Swift’s chip for much less than that.