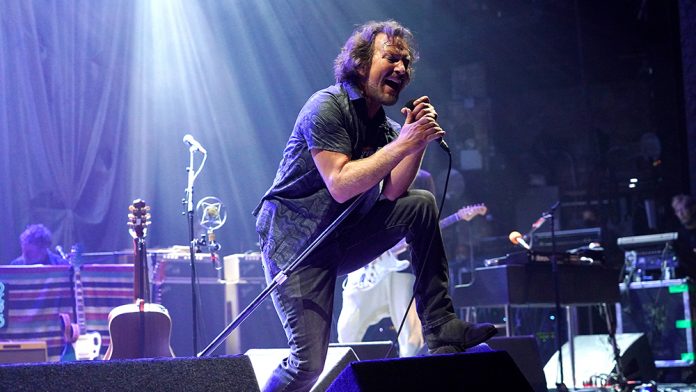 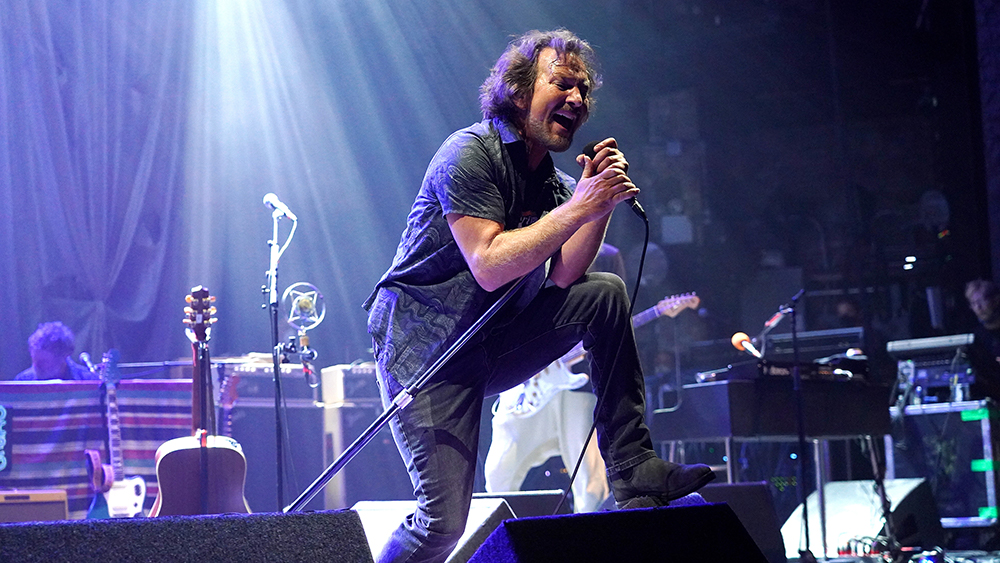 On the basis of his solo show at New York’s Beacon Theater on Friday night, Eddie Vedder hasn’t lost his sense of spontaneity. Since last May, the Pearl Jam frontman unexpectedly recorded an album with a new group of musicians and is now on the road with them for his first performances in indoor venues since July 2018.

“We had some difficult times getting here, and if you feel the same, now is all that we have worked for,” he told the crowd during the second of two sold-out shows to start the three-week run.

For some, it may seem a bit strange seeing an Eddie Vedder-led rock show without his Pearl Jam bandmates. Indeed, this is something of a first for both parties in their 30-plus-year Rock and Roll Hall of Fame career. Few frontmen of bands this popular have formed new solo projects while their original groups are still active (Jerry Garcia and Thom Yorke come to mind). For Vedder, it’s a big departure from his past decade’s worth of solo touring, in which he’s largely played on his own in stripped-down, acoustic settings.

On Friday, it was all a balancing act he pulled off nicely: debuting a bunch of fresh material, most of which won’t be released until the “Earthling” album arrives on Feb. 11, while also offering up several manna-from-heaven rarities for the scores of Pearl Jam die-hards in attendance (the performance was recorded for future broadcast on SiriusXM’s Pearl Jam radio channel).

Backed by guitarist Andrew Watt (who also produced and co-wrote the material on “Earthling”), Red Hot Chili Peppers drummer Chad Smith, that band’s former guitarist Josh Klinghoffer, Jane’s Addiction bassist Chris Chaney and solo troubadour in his own right Glen Hansard, Vedder and his Earthlings eased into the show with covers of R.E.M.’s “Drive” and Tom Petty’s “Room at the Top,” an appropriate amalgam of the influences that have informed Vedder’s creative ethos since his early days.

The first real eye-opener came next, as the group dusted off Liverpool band the La’s’ “Timeless Melody” — a song Pearl Jam used to cover in the early aughts, but hadn’t played itself since 2004. “They made one record — a truly, truly magnificent record,” Vedder said. “We all share an affinity for the songs.”

From there, it was four cuts from “Earthling” that offered a tasty cross-section of the album’s sound: the chugging, major-key “The Dark,” the synth-flecked, roof-raising “Invincible,” the knowing Petty nod “Long Way” and the powerful rocker “Brother the Cloud,” which sure seems to be about the 2017 suicide of Soundgarden’s Chris Cornell. The long sustained notes at the end of the latter two songs were a potent reminder that at 57, Vedder still has one of the best and instantly recognizable voices in rock ’n’ roll.

Although Smith’s thunderous drumming was often the loudest sound in the room, the other musicians did right by everything from The Who’s “I’m One” to the piano ballad “The Haves” (dedicated to Vedder’s wife, Jill) and the unabashed Beatles homage “Mrs. Mills,” the studio version of which features none other than Ringo Starr on the skins. Photographer Danny Clinch joined the group to play harmonica on the ultra-fast song “Try,” filling the big shoes of Stevie Wonder, whose solo on the album incarnation of the song qualifies as one of his most unusual recorded guest appearances.

Long Island native Watt was clearly living out a dream playing with his musical hero Vedder, especially in front of an audience of friends and family. His deep knowledge of the Pearl Jam catalog helped kick the show into a higher gear when the musicians played “Dirty Frank,” a 1992 Pearl Jam B-side inspired by the band’s formative time touring with the Red Hot Chili Peppers. Astonished audience screams were audible as the group began the song, which borrows one of the Peppers’ high-stepping, elastic grooves for a jokey romp that ends with Pearl Jam guitarist Mike McCready being eaten by a murderous tour bus driver. The fact that Pearl Jam hasn’t revisited “Dirty Frank” since 2006 reinforced the “Why not?” sense of adventure fueling the whole Vedder-and-the-Earthlings enterprise.

A main set-closing cover of Pearl Jam’s “Porch” kept the energy high going into the encore, when the one-two punch of Pearl Jam’s “Not for You” and Neil Young’s “Rockin’ in the Free World” brought it all back home with massive four-guitar energy. Vedder and Klinghoffer traded lead vocals on a finale of “Purple Rain,” after which an ecstatic Watt bear-hugged Klinghoffer from behind. Fists were held aloft and high-fives with strangers were exchanged — for some, the first time they’d done so in a concert setting in more than two years.

Overall, the two-hour show proved that Vedder can effectively explore new territory as an individual artist with different musicians, without short-changing the inimitable legacy he’s worked so hard to build with Pearl Jam. Indeed, it wouldn’t be at all surprising to see this quick Earthlings detour rub off on the Seattle quintet and bear fruit sooner rather than later for them too.

Hansard opened the evening with a solo set, as he has done on many Vedder tours over the past decade. At one point, he mused that Vedder’s audience must be sick of him by now, but, judging from the mid-set standing ovation he received after performing his “Once” favorite “Falling Slowly,” that is far from the case. Hansard will return to the Beacon on March 17 with his Swell Season partner Marketa Irglova as part of their first U.S. tour in 11 years.

Here is Eddie Vedder and the Earthlings’ set list:

Encore:
“Isn’t It a Pity” (George Harrison)
“Not for You”
“Rockin’ in the Free World” (Neil Young)
“Purple Rain” (Prince)

Facebook
Twitter
Previous article
How did things get so bad at Auburn? What to know about the program’s and Bryan Harsin’s future
Next article
Takeaways from the 2022 NHL All-Star Weekend: Giroux’s MVP turn, McDavid’s tough weekend, Las Vegas shines