Can Joe Milton put a stop to Michigan’s quarterback carousel? 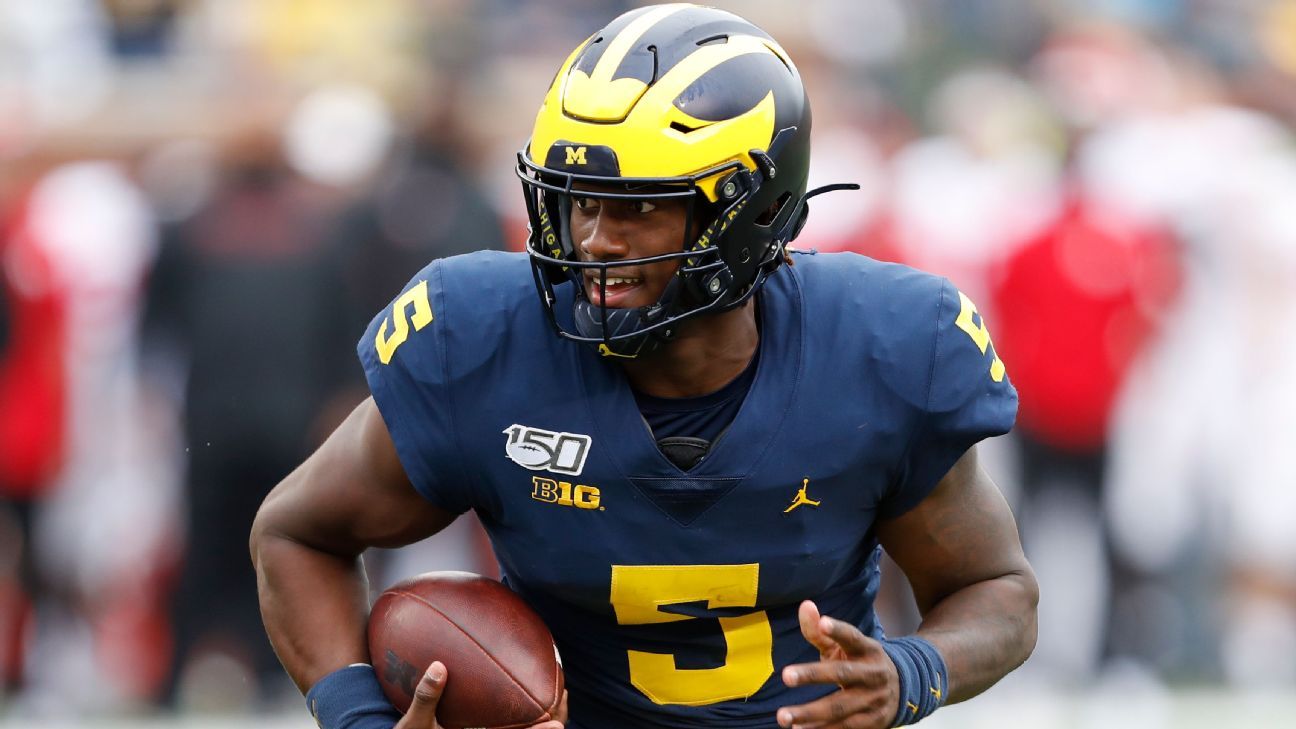 When Michigan plays Minnesota on Saturday (7:30 p.m. ET, ABC), it will mark the first time Jim Harbaugh opens a season as head coach of the Wolverines with a starting quarterback he recruited out of high school.

Let that sink in.

Harbaugh has had holdovers from the previous staff and transfers brought in in an attempt to patch holes in his five previous seasons in Ann Arbor. One of his recruits started a few games, but never someone who won the job in the offseason.

Quarterback hasn’t been Michigan’s only problem, but it is a position that has held its offense back in the past. In 2019, Michigan had a solid offensive line, playmaking wide receivers on the outside and options at running back. But it was missing that final piece.

Coaches hope they now have that in Joe Milton.

“If you said who’s probably one of the most improved players on the team, obviously I would like to throw Joe in that mix,” offensive coordinator Josh Gattis said. “I don’t want to just say that from a physical standpoint, when we’re talking about improvement and improvement comes in a number of different ways. Leadership, physically and then obviously being able to learn the offense.”

Harbaugh wouldn’t go as far as naming Milton the starter even though he has been running with the first team in practice, but all signs point to the 2018 four-star recruit taking over. A 6-foot-5, 243-pound quarterback from Pahokee, Florida, Milton has the tools and ability to elevate the Wolverines’ offense. Some of his coaches and teammates believe he could be a future first-round NFL draft pick.

As everyone focuses how Michigan’s offense will perform against its toughest competition — mainly Ohio State — it begs the question of whether Milton is the Wolverines’ missing piece.

“I think that he’s, I know that he’s very ready. He’s playing with so much confidence,” safety Brad Hawkins said. “The way that he’s very poised, he comes out there every day ready to work. His confidence is just off the charts and I just can’t wait to see what he brings to the table and what he does for this offense and this football team Saturday.”

In Harbaugh’s first recruiting class, 2015, Michigan signed ESPN 300 quarterback Zach Gentry, a 6-7, 237-pound prospect from New Mexico who’d flipped from Texas. He also signed four-star in-state quarterback Alex Malzone. Both of them were options down the road as Harbaugh brought in Jake Rudock, a transfer from Iowa meant to be more a transition piece than a trend starter.

Rudock threw for 3,017 yards and 20 touchdowns in a 10-3 season, and there was positivity around the program despite losses to Michigan State and Ohio State. But Gentry switched to tight end once he hit campus, and Malzone never attempted a pass in three years, eventually transferring to Miami (Ohio).

In 2016, Michigan turned to Brady Hoke recruit Wilton Speight and Houston transfer John O’Korn. Behind them was Brandon Peters, rated the No. 3 pocket passer in the 2016 recruiting class, a quarterback Michigan hoped would be Harbaugh’s big recruit and who was slated to sit and develop before taking over under center.

Michigan went 10-3 again that season, with losses to Iowa and Ohio State, as well as Florida State in the Capital One Orange Bowl. Speight completed 61.6% of his passes and threw for 2,538 yards, 18 touchdowns and seven interceptions.

“Joe got here a semester before me, but I’ve been around Joe just as much as anybody and he’s just lights-out right now. It’s very exciting to play alongside him.” Michigan wide receiver Ronnie Bell

The next season brought on many doubts at the quarterback position. Speight broke three vertebrae in his back in a Week 4 win over Purdue, which brought O’Korn and Peters to the field.

The hope surrounding Peters deflated after he went 36-for-63 with 482 yards and four touchdowns in games against Rutgers, Minnesota, Maryland and Wisconsin. He relinquished the job to Ole Miss transfer Shea Patterson and ultimately transferred to Illinois prior to the 2019 season.

Pick the winner of 10 college football matchups each week. Play straight up or confidence. Make Your Picks

The 2019 season started off rough, but there was a change in the middle of Gattis’ first season as offensive coordinator. Michigan had the biggest improvement in Bill Connelly’s SP+, a tempo- and opponent-adjusted measure of college football efficiency, from the first half to the second, going from 66th to 21st.

The offense started to click in the three games prior to the matchup against Ohio State, a stretch during which Patterson averaged 300.3 yards per game, threw 10 touchdowns to only one interception, and threw catchable attempts on 81.53% of his passes.

The problem, however, came in the five regular-season games against ranked opponents, which accounted for three of Michigan’s four losses in 2019. In those five games, Patterson averaged a 49.6% completion percentage and 209.4 yards passing. He had five touchdowns to four interceptions, and his catchable attempts dropped to 72.54%.

It’s those games against Wisconsin, Penn State and Ohio State — the biggest stage — where Michigan is looking for leadership and a quarterback who can perform.

That’s where the Wolverines hope Milton can step in.

“We’ve got a quarterback leading the offense, leading the entire team in a very special way,” defensive tackle Carlo Kemp said. “You look at Joe and you just, you’re just excited for Joe because you know everything he’s gone through to get to this point. … It’s like, seeing all of that come to fruition is incredible, and what we have at quarterback is very special.

When the Wolverines signed Milton in 2018, an assistant coach said privately he believed Milton would eventually be the best quarterback Harbaugh has had at Michigan.

What Milton brings to the table that’s different from Michigan’s past quarterbacks begins with his physical attributes. He has the size and the ability to make plays with his feet. Gattis and defensive coordinator Don Brown also note Milton’s power with his arm, something that can be a blessing and a curse. That has been part of his development: He doesn’t need to use all his speed and power in every throw.

“Everyone’s got all five fingers, so there’s no fingers getting jammed out there, no one losing anything,” Gattis said. “His accuracy has been exceptional, and that was one of the things we had talked about as far as taking RPMs off of it. Knowing how to give a catchable ball and that was never — accuracy as far as ball placement was never an issue.

“Sometimes the issue had been in the past is whether or not those receivers could catch it that fast.”

The most recent time Joe Milton took the field, he threw for 59 yards and a touchdown and ran for another score in a 52-0 rout of Rutgers in September 2019. Raj Mehta/USA TODAY Sports

What might separate Milton most, though, is his confidence and his command of the offense and the team. Brown said Milton sometimes pops into his office to ask about coverages and the defense’s different looks to help him prepare. Leadership can’t be quantified and being a vocal leader is something that is learned, but Michigan has needed that presence at quarterback.

“You watch him grow since freshman year and I go back to Joe’s freshman year when he was scout quarterback,” Kemp said. “How he led the scout team, you knew one day that, OK, this guy right here, when it’s his time, it’ll be his time and it’s going to be very special. And now he’s grown up into his third year with the same guys that he used to lead on that scout team.”

Sure, Michigan’s recent quarterback history cautions against buying into the hype, and Milton has yet to start a game for the Wolverines. But there is a different sense of optimism when it comes to Milton.

“Joe as a quarterback, I talked about it with one of the guys probably like a week ago, this is the best I’ve ever seen Joe,” Ronnie Bell, Michigan’s leading receiver in 2019, said in September. “Joe got here a semester before me, but I’ve been around Joe just as much as anybody and he’s just lights-out right now. It’s very exciting to play alongside him.”

The Wolverines have recruited more speed to accommodate what Gattis wants to see on the field, in the form of wide receivers Mike Sainristil, Giles Jackson, A.J. Henning and Roman Wilson. There’s finally a group of running backs to give Michigan a strong ground game, with Zach Charbonnet, Chris Evans, Hassan Haskins, Blake Corum and Christian Turner.

There are pieces around Milton who will ease the pressure on him. Michigan doesn’t need Milton to be mistake-free, but the Wolverines need him to elevate the offense against tougher competition on the schedule. They need him to solidify himself as a trustworthy and reliable passer to stop the quarterback carousel.

“I just like to credit [quarterbacks] Coach [Ben] McDaniels and Coach Harbaugh and those guys developing that position, because I’ll tell you it was scary a little bit for us, losing a quarterback, a starting quarterback,” Gattis said. “Going into the offseason, I really challenged [the quarterbacks] and said, ‘Hey, we need someone to step up and show us they can lead this team.’ And what we’ve seen so far from Cade [McNamara, a sophomore] and Joe, both those guys display a tremendous amount of talent to be able to lead this team at the quarterback position, and obviously both guys are playing really well.”