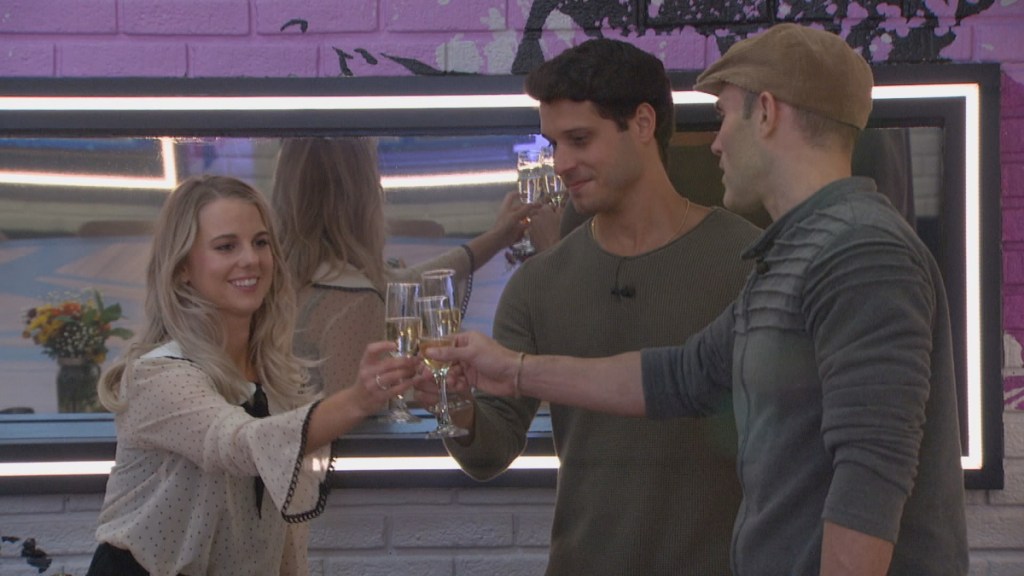 SPOILER ALERT: Do not read if you have not yet watched the season finale of “Big Brother: All-Stars.”

In lieu of its usual live studio audience, “Big Brother” wrapped its 20th summer and yet another season of twists, surprises and controversies by awarding its second-ever “All-Stars” winner.

Host Julie Chen Moonves kicked off the night with Part 2 of the final Head of Household competition in which Cody Calafiore and Enzo Palumbo faced off to compete against Nicole Franzel who won last week’s Part 1 endurance game.

In a game of “Camera Hogs,” the two male players identified the faces of evicted houseguests and matched their photo with clues displayed on postcard boards. Then, they had to walk across a log, while avoiding getting knocked down by large pig heads swinging from side-to-side.

After making it across the bridge, Cody and Enzo had to hit a buzzer to take a “photo” of themselves with the other houseguests’ faces, while making sure the pigs are not included in the frame.

While working on the second postcard, asking them to identify three houseguests who were nominated twice, Enzo misread the instructions and lost time searching for two photos in stead. Despite feeling upset, he finished the game in frustration hoping for a “miracle” to save him from eviction.

That mistake eventually cost Enzo the opportunity to secure his own safety in the final two — Cody completed the task in no time (just under five minutes, to be more exact), beating Enzo’s 37-minute time in a landslide. Enzo left the game stage in distress, saying, “I just feel bad for everyone who had hope for me.”

Prior to Part 3 of the HoH competition, the show revisited seven jury members who were joined by Christmas Abbott for a conversation on the final three houseguests.

While seasons past have invited “BB” alumni to host the discussion portion of the finale, the houseguests talked amongst themselves due to coronavirus precautions. Jury members were divided on the individual gameplay of Cody, Enzo and Nicole.

While Da’Vonne Rogers and Ian Terry expressed discomfort toward Nicole’s dishonesty, Kevin Campbell and Daniele Briones commended her clever gameplay. Memphis Garrett spoke to Enzo’s outstanding social game, and Ian agreed that “no one even thought of nominating him” throughout the season. Kevin pointed out Cody’s poor jury management, but Ian and Tyler Crispen disagreed, adding that they always felt included in his conversations.

The show cut back to the “BB” house for Part 3 of the final HoH competition, “Vinyl Exam.” Nicole and Cody watched eight short video clips of every jury member that displayed three “facts” about their game. Once the clues stopped playing, they had to identify one of three vinyls displaying false information.

With no time to process his win (and his second time to secure his own seat as a finalist), Cody was immediately put in the hot seat, having to make an emotionally charged decision. Nearly breaking down in tears, Cody eliminated Nicole, who then became the ninth and final jury member of the season. The former winner broke out in tears as she put on her mask and exited the “BB” bubble.

Beyond the doors, Nicole continued tearing up in her post-eviction interview with Julie, saying it was the “first time I didn’t see it coming this season.” But the former winner clarified that she was in no way upset at Cody, despite the duo having a final two deal.

“The craziest thing is I wouldn’t have done it to him, but he’s got guts,” she said. “I’m not angry at him but oh my, it’s going to take me a bit. … I honestly just thought I was gonna make it to the finish line and never saw another way around it.”

With Nicole stepping off stage, the eight jury members joined Julie outside the “BB” house. The host maintained social distancing from the evicted cast members who left their masks behind and dressed up for the occasion. Nicole surprised jury members, especially Dani and Christmas, who also learned that Cody was the one to evict her.

Before casting their votes, each jury member asked one question to either Enzo or Cody. Questions from Memphis, Kevin and Da’Vonne were specific to how they have evolved as players from their previous seasons.

In response to Ian’s question on how he played a more well-rounded game than Cody, Enzo responded that he used Cody as his “weapon” to evict other players. “For someone to play 85 days without being on the block, I’m so proud of that,” Enzo said of his social game.

When Nicole asked if he had considered taking her over Enzo to the end, Cody responded that “it weighed heavily” on him to take a former winner to the finale over giving the opportunity to someone who couldn’t experienced that (and fell short at final three exactly 10 years ago).

Nine houseguests cast their votes one by one, from the first jury member Ian to Nicole, and sat back down to hear from Janelle Pierzina, Bayleigh Dayton, Nicole Anthony, Keesha Smith and Kaysar Ridha who virtually joined from the comfort of their homes.

With every “All-Stars” cast joining her, Julie revealed the first five votes — from Ian, Da’Vonne, Kevin, Dani and David Alexander — that locked in Cody as the winner.

With his mask half tucked under his chin, Cody finally walked out of the house to join jury members on stage. White confetti pouring from above almost made it impossible to see Cody’s reaction to seeing his family who joined onscreen via video.

“I never thought I’d be back here and win the game,” he said.

The host announced that Cody had won the $500,000 prize by a unanimous vote, the first time that occurred since Dan Gheesling’s victory from Season 10.

Runner-up Enzo, who received $50,000, gave a special shoutout to his family: “Everything I do is for my kids.”

Before closing, Julie announced that the coveted title — especially among an “All-Stars” cast — of America’s Favorite Houseguest came down to Tyler and Da’Vonne, with “BB” fans ultimately rallying around Da’Vonne. She won the with nearly one million votes.

With CBS renewing its long-running series for another year, Julie wrapped the night with an open invite for new applicants: “Remember, always have faith and I’ll see you next summer.”