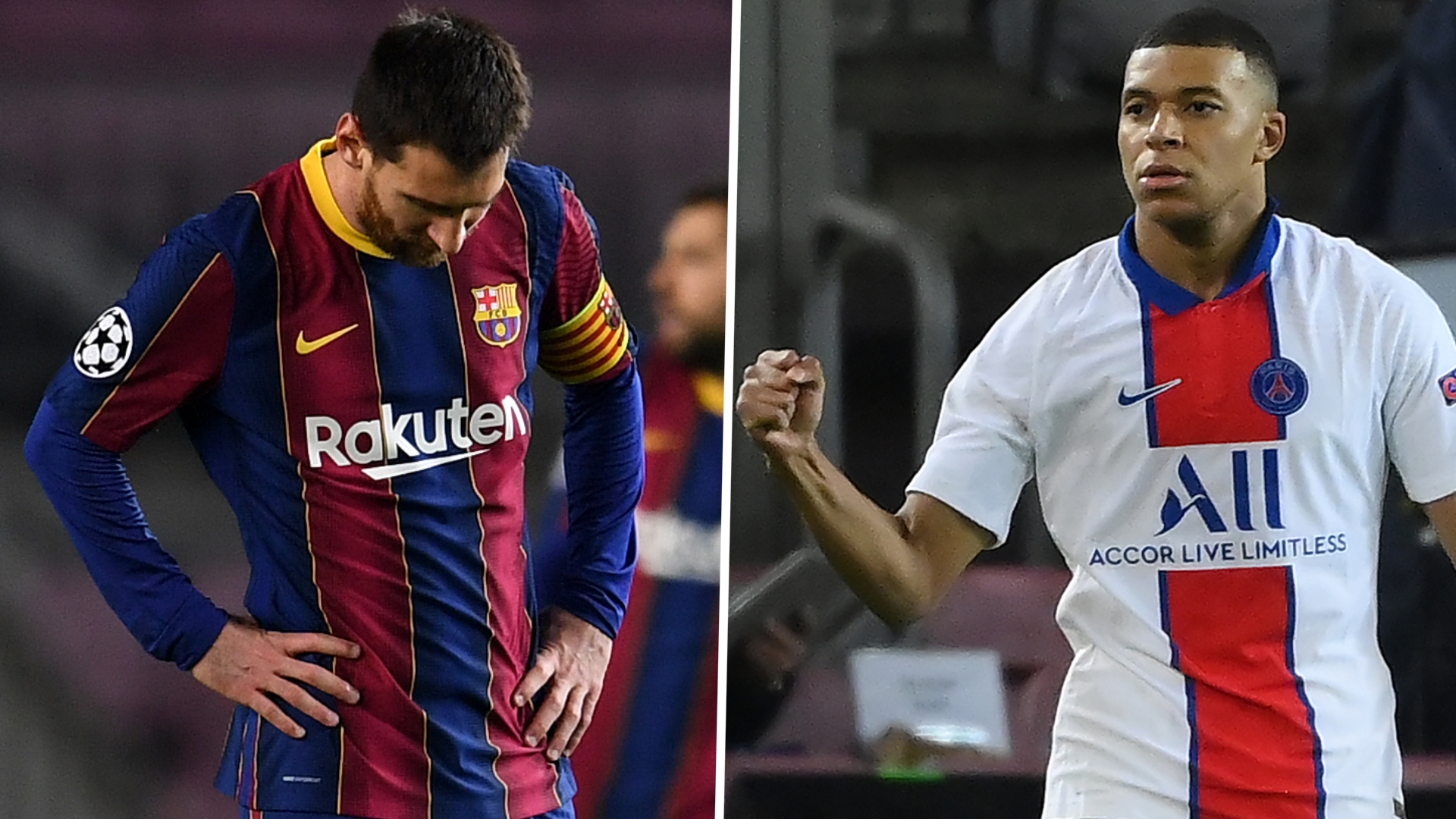 There was enthusiasm, there was spirit, but ultimately there was Kylian Mbappe and a brutal reality check for Barcelona.

Ronald Koeman’s side suffered a crushing 4-1 defeat by Paris Saint-Germain on Tuesday night in the Champions League last 16, and they will need another ‘remontada’ to get out of this one. It doesn’t look likely.

Their whole season is almost over, in terms of potential trophies, but this campaign never seemed promising on that front after last summer’s 8-2 annihilation by Bayern Munich and Lionel Messi’s foiled attempt to flee.

Koeman took over with the mandate of moving on some of the veterans and bringing through youth players, while ensuring Barcelona didn’t embarrass themselves again. So, it’s sad, but not surprising, that they find themselves here, no longer among the game’s elite teams.

They are on the verge of elimination in Europe, 2-0 down in their Copa del Rey semi-final against Sevilla, and eight points behind La Liga leaders Atletico Madrid, having played a game more.

A string of good results in 2021, Messi returning to form and the rise of 18-year-old starlet Pedri Gonzalez gave Barcelona hope, which augmented further with Neymar and Angel di Maria’s injuries ruling them out of this first-leg clash in Catalunya.

The pendulum shifted from 2020 runners-up PSG’s favour, when the last 16 draw was made, towards Barcelona. Or so we thought. The first half reflected that in an end-to-end, roll-with-the-punches thriller.

Marc-Andre ter Stegen and the jittery Sergino Dest were able, between them, to stop Mbappe in the first minute, while Pedri’s sublime pass for Antoine Griezmann was wasted by the forward.

Barcelona took the lead through Messi, scoring his fourth goal in the Champions League this season, all of them from the penalty spot, after Layvin Kurzawa brought down Frenkie de Jong.

It was an accidental trip by the French full-back, a soft penalty which stoked memories of the two conceded in the infamous 6-1 comeback in March 2017, but he made contact with the Dutchman. 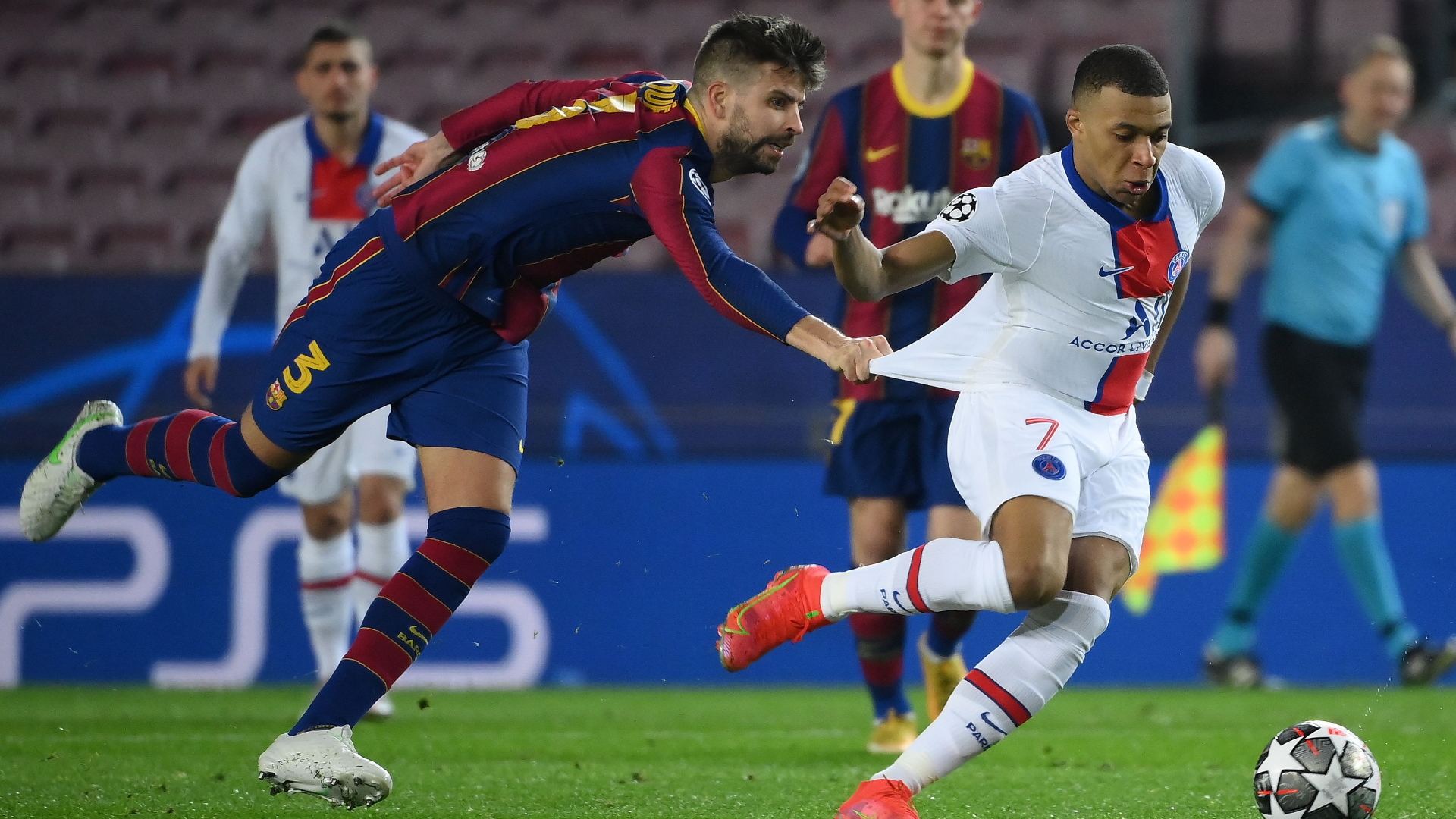 Messi’s penalty was emphatically slotted home (no wonder Manchester City are interested in him!) and 2021 is now the 17th consecutive calendar year that he has scored in the Champions League, equalling Real Madrid legend Raul Gonzalez’s record, set between 1995-2011.

Ousmane Dembele should have doubled Barcelona’s lead but sent a tame shot at Keylor Navas, which was reminiscent of his infamous miss against Liverpool in the 2019 semi-final first leg that should have sent his team 4-0 up. Instead, the score stayed at three and we all know what happened at Anfield…

Barcelona were made to pay, then and now, with Mbappe quickly firing PSG level. If he had a moment of luck when his slack touch to control bounced up to him instead of away from him, there was nothing fortunate about what happened next.

With lightning speed reactions he cut left and then lashed past Ter Stegen, into the roof of the net.

Mbappe’s lesser compatriot, Griezmann, fired wide at the other end on a strong Barcelona counter as they showed they were still in the fight.

Mbappe’s influence only grew in the second half, as he showed why he will be football’s true next superstar, trying to take the reins from Messi himself in this match.

His second was a poacher’s finish and after the unmarked Moise Kean headed in the third, Mbappe produced a brilliant curled effort to kill Barcelona and the tie on a rapid counter.

Barcelona rushed Gerard Pique back from a near three-month injury for this game but he may as well have stayed at home as Mbappe toyed with Barcelona, who were always recoiling, flailing and eventually crumbling.

This wasn’t an 8-2 end-of-an-era humiliation like against Bayern, but nor did it prove a fair fight by the end. It showed how far Barcelona have yet to go to recover what they once were.

It also shows why Messi was desperate to leave in the summer, and why he might well do so in the summer ahead.

There may yet be further to fall before Barcelona can rise again.