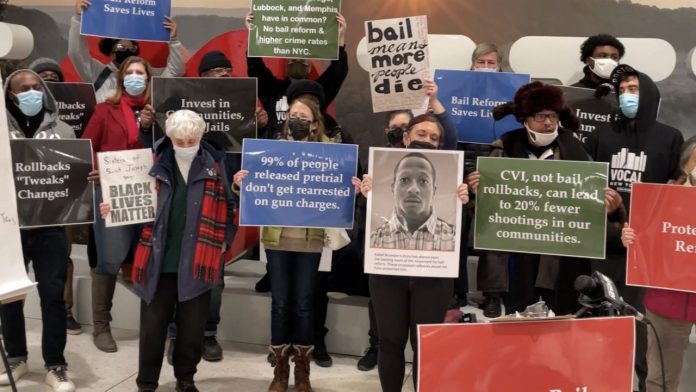 New York lawmakers joined criminal justice advocates in the State Capital on Monday to argue in support of the bail reform measures enacted in 2020.

“This is an abolitionist experience for each and every one of us,” state Assembly Member Latrice Walker said.

The group spoke out against efforts to tweak bail reform.

The law, which bars a judge from imposing bail in most misdemeanor and non-violent felony cases, took effect in 2020.

“Public safety also means not worrying about being a victim to systems that are designed for people to fail,” state Assembly Member Amanda Septimo said.

Advocates say 70% of jailed New Yorkers were awaiting trial before bail reform, and Black people were two times more likely to be incarcerated than white people.

Some lawmakers and state leaders are calling for changes.

Tedisco is one lawmaker who said bail reform is not working.

“It’s a danger to everybody. It’s a ‘get out of jail free card,’” Tedisco said. “Do we have to throw away the whole concept? No. But we can better protect our constituents.”

“If we have to release them by this law and they don’t show up for their court date, I think the judge should have the right to decide if there should be cash bail,” Tedisco said.

“We know that 98% of people who have been awaiting trial between July 2020 and July 2021 were not rearrested, and those numbers sound like success to me,” Walker said.

Tedisco said failures are not hard to find.

“Ask the family members who have lost loved ones to the shootings,” he said. “To the people who get in cars over and over again impaired and take lives. Ask them if this is fearmongering.”