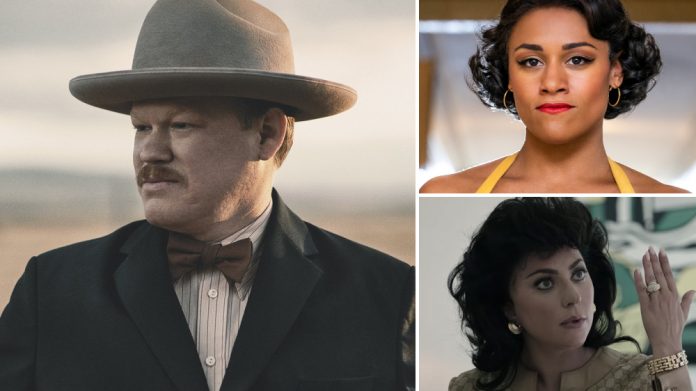 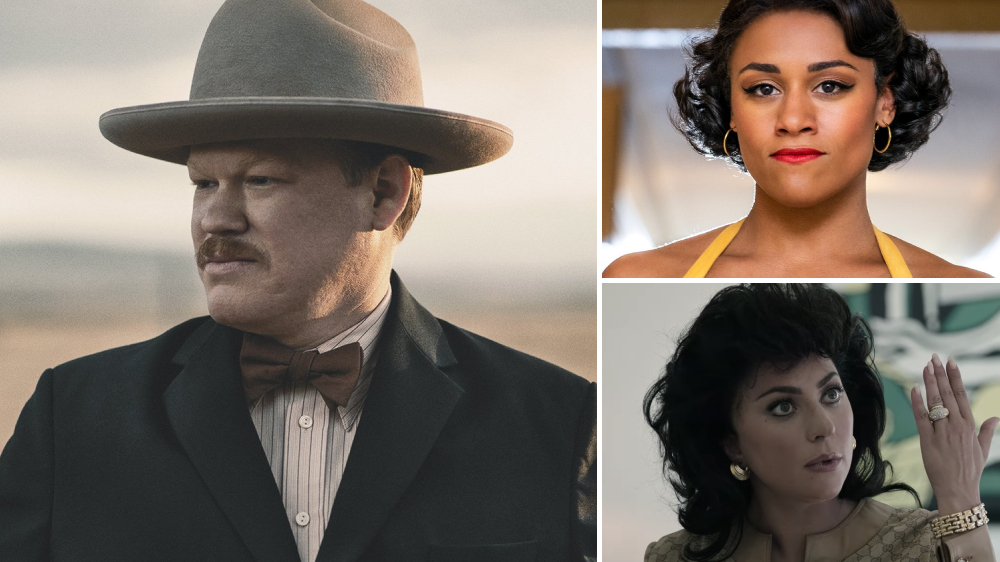 It’s unclear what was more shocking — the snub of Lady Gaga or the over-performance of Netflix’s “The Power of the Dog,” which has put the streaming giant in the best position to nab its first best picture trophy, something its been seeking for years.

For the second year in a row, the best actress is completely wide open and turned upside down, even more than last year’s race that had a different winner at all the televised award ceremonies. This year, only Gaga’s turn in “House of Gucci” was nominated at the BAFTA, Critics Choice, Golden Globes and SAG Awards, leaving many to assume that she would be walking away with her first acting Oscar. For the first time in history, no BAFTA nominees for lead actress are nominated at the Oscars. The SAG Awards have now become critically vital to nominees like Jessica Chastain (“The Eyes of Tammy Faye”), Olivia Colman (“The Lost Daughter”) and Nicole Kidman (“Being the Ricardos”), all of whom have an opportunity to stand out next to Oscar-winner Penélope Cruz (“Parallel Mothers”) and first-time nominee Kristen Stewart (“Spencer”).

The million-dollar question is who wins best actress?

Kidman, who has a Golden Globe for lead actress in a drama, could seal the deal with a SAG win, where she has never won for a film performance. Colman, an Oscar winner for “The Favourite” (2018), also has never won an individual SAG award. And then there’s Chastain, nabbing her third career nod after “The Help” (2011) and “Zero Dark Thirty” (2012), who now stands as the most “overdue” by awards standards.

To make things more confusing, none of the leading women are from best picture nominees, which hasn’t occurred since Reese Witherspoon triumphed for “Walk the Line” (2005).

So, where does that leave Cruz and Stewart? Cruz’s nomination looks like the reward for making it into the lineup, with no televised nomination coming before it. For Stewart, I would say as long as Kidman doesn’t win at the SAGs, she seems like the favorite to walk away with a Critics Choice Award. The 31-year-old could become the first leading performer to win the Oscar in the modern era without a SAG and BAFTA nomination. Only two supporting actress winners have done so — Marcia Gay Harden in “Pollock” (2001) and Regina King in “If Beale Street Could Talk” (2018).

When assessing the day for “The Power of the Dog,” it’s all about showing that it has the goods to win best picture. Today, it displayed that with 12 nominations in total, the most of any film, including “cherries on top” mentions for Jesse Plemons in supporting actor alongside his co-star Kodi Smit-McPhee, production design and sound.

Interesting note that only five out of the last 17 films to lead in nominations successfully won the best picture.

But Campion isn’t the only one that can nab the three top awards as writer, director and producer Kenneth Branagh of “Belfast” landed the three coveted spots, which put him in an elite group of his own. With two of his three noms for picture and original screenplay, Branagh is the first person to be nominated in seven individual Oscar categories, surpassing George Clooney, Alfonso Cuarón and Walt Disney, who were recognized in six. With his five previous nominations for director, actor (“Henry V”), supporting actor (“My Week With Marilyn”), adapted screenplay (“Hamlet”) and live-action short (“Swan Song”), he’s never won an Academy Award. But, after winning best screenplay at the Globes, original screenplay could be his winning ticket.

His semi-autobiographical drama had its own share of surprises and stumbles. The film landed two acting noms, but not the ones everyone assumed. Caitríona Balfe was snubbed in supporting actress in favor of her co-star and former Oscar-winner Judi Dench, who becomes the second oldest nominee in the category’s history, 161 days younger than Gloria Stuart was for “Titanic” (1997). As the loving grandfather Pop, character actor Ciarán Hinds nabbed his first Oscar nom, the challenger to critical darling Smit-McPhee, who now has the potential vote-split with his co-star Plemons. Troy Kotsur of “CODA,” who is the second deaf actor ever nominated after his co-star Marlee Matlin for “Children of a Lesser God” (1986), for which she won, can also be a viable winner.

Despite Globe and Critics Choice noms, Jamie Dornan ultimately missed out on a possible nomination. The cinematography and editing miss for Haris Zambarloukos and Úna Ní Dhonghaíle were substantial, especially with the latter, which tends to be vital in the hunt for the top prize. However, films like “Birdman” (2014) and “Driving Miss Daisy” (1989) have been able to secure the top category without the critical nom.

Warner Bros’ “Dune” had a forecast of 10 nominations, which it received, but the miss wasn’t in adapted screenplay like I had assumed. Instead, Denis Villeneuve was the glaring omission from the lineup instead of presumed softer filmmakers Paul Thomas Anderson (“Licorice Pizza”) and Steven Spielberg (“West Side Story”). “Dune” is the sixth film in history to be nominated in all seven technical categories — “Titanic” (1997), “Master and Commander: The Far Side of the World” (2003), “Hugo” (2011), “Mad Max: Fury Road” (2015) and “The Revenant” (2015). Villeneuve’s film is the first not to pull in a correlating director mention. His snub is the most shocking since Ben Affleck for “Argo” (2012).

Though it seemed to stumble today with a snub for Bradley Cooper in supporting actor, “Licorice Pizza” netted three noms, all of which are added to Paul Thomas Anderson’s tally, which add up to 11 career nods. Anderson hopes to be a spoiler to Branagh in original screenplay, his most likely spot for recognition.

Cooper, who also had eight nominations going into the morning, now adds another as one of the producers for “Nightmare Alley” with its best picture nomination. Unfortunately, the film failed to capture any acting noms for Cooper or his co-star Cate Blanchett, who also made history. With her additional role in “Don’t Look Up,” she has had roles in the most best picture nominated films of any woman in history with eight, surpassing Olivia de Havilland at seven. De Havilland is also tied with Blanchett’s co-star Meryl Streep, who also moves up a notch.

Other significant historical feats this year included “King Richard” star Will Smith becoming the second Black man and the ninth person nominated for producing and acting in the same year. His fellow nominee Denzel Washington (“The Tragedy of Macbeth”) hit this milestone with “Fences” (2016). With Smith’s film pulling a healthy six noms in total, his potential Oscar win, 20 years after his first for “Ali” (2001), is looking more likely. He’ll have to fend off “Power of the Dog” star Benedict Cumberbatch.

Ariana DeBose became the first queer woman of color to be nominated for acting for her turn as Anita in the remake of “West Side Story.” A Globe winner, she’s also expected to sweep the rest of the season, which would make her the second Latina to ever win an acting Oscar, following her co-star Rita Moreno’s turn in the 1961 version.

Latinos had a stronger showing overall aside from just DeBose. Lin-Manuel Miranda is close to becoming an EGOT recipient after nabbing another Oscar nom for original song for “Dos Oruguitas” from the smash-hit “Encanto.” The film landed an animated feature nom, which made producer Yvett Merino the first Latina ever to be nominated in the category. Composer Germaine Franco also becomes the first Latina and the fourth woman recognized in original score. Only one, Hildur Guðnadóttir (“Joker”) has won. Guillermo Del Toro shares a producing credit for “Nightmare Alley,” adding another best picture nod to his resume. Cuban Phil Lord adds another nomination to his list of accolades for the animated feature “The Mitchells vs. the Machines,” which has won the most critics’ prizes this year.

Neon’s animated documentary “Flee,” representing Denmark, made history by landing three nominations across its categories. Unfortunately, best picture couldn’t come with it, but perhaps it was close?

International features were pronounced with the voting membership. Japan’s “Drive My Car” picked up significant attention, including best picture, director for Ryûsuke Hamaguchi and adapted screenplay. Aside from best international feature, its competitor from Norway, “The Worst Person in the World,” also managed a pick-up in original screenplay for Eskil Vogt and Joachim Trier. However, we shouldn’t assume that Japan’s film is nominated in the top categories automatically will win this race. With the entire 9,400+ Academy membership voting, a three-hour drama may be more brutal to sell versus a look at a lighter look at millennials.

The snubs came fast and furious, echoing an Academy that will always move to the beat of its own drum.

Backed by Netflix, Jessie Buckley snuck into supporting actress at the expense of her studio counterpart Ruth Negga for “Passing,” which was completely shut out.

Amazon Studios’ “Being the Ricardos” had a strange assimilation of nominations, picking up three acting noms for Kidman, Javier Bardem in best actor and J.K. Simmons in supporting actor, but coming up short in best picture and original screenplay for Aaron Sorkin. It’ll be up to Kidman to bring home a win for the streamer, especially since Asghar Farhadi’s “A Hero” was also snubbed.

Despite a PGA nomination and a surprising editing mention, the musical “Tick, Tick … Boom!” from debut director Lin-Manuel Miranda, who is closer than ever to EGOT status after his original song nom, was left out of the best picture lineup.

The music branch turned its nose up to hip hop music as two Netflix tracks, “Guns Go Bang” from “The Harder They Fall” and “Just Look Up” from “Don’t Look Up” were both overlooked. Rapper Kid Cudi contributed to both, along with Ariana Grande and Jay-Z, who are both on the outside looking in.

The lone screenplay statistic died this year with no film picking up a single mention for its scribes, which has happened every year since 2009.

Diversity wasn’t as prevalent as last year, with no people of color recognized as lead actresses or supporting actor, but consistency doesn’t seem to far away if we can keep pushing Hollywood to do better.

The race continues, and Oscars producer Will Packer has a lot to work with for his upcoming show.